Let’s start with the facts: Santa Claus is magical. Regardless of whether or not you believe in him (or magic, for that matter), the man deserves some credit—and frequent flier miles—for what is undoubtedly the largest seasonal productivity spike in the global workforce.

In one night, Santa and his reindeer, plus an immeasurable payload of toys and coal, manage to visit an estimated 91.8 million homes in 31 hours, according to scientific calculations. That means he must travel 650 miles per second—roughly 2.3 million miles per hour—with about one millisecond per household to hop down the chimney, arrange all the gifts, nosh on some cookies, and hoist himself back up to the rooftop.

Naturally, we asked ourselves: what if Santa Claus were to race against Bolt, a cheetah, and a Bugatti? We even gave Bolt the home-field advantage: the 100-meter dash, his best event, in which he currently holds the world record at 9.58 seconds. 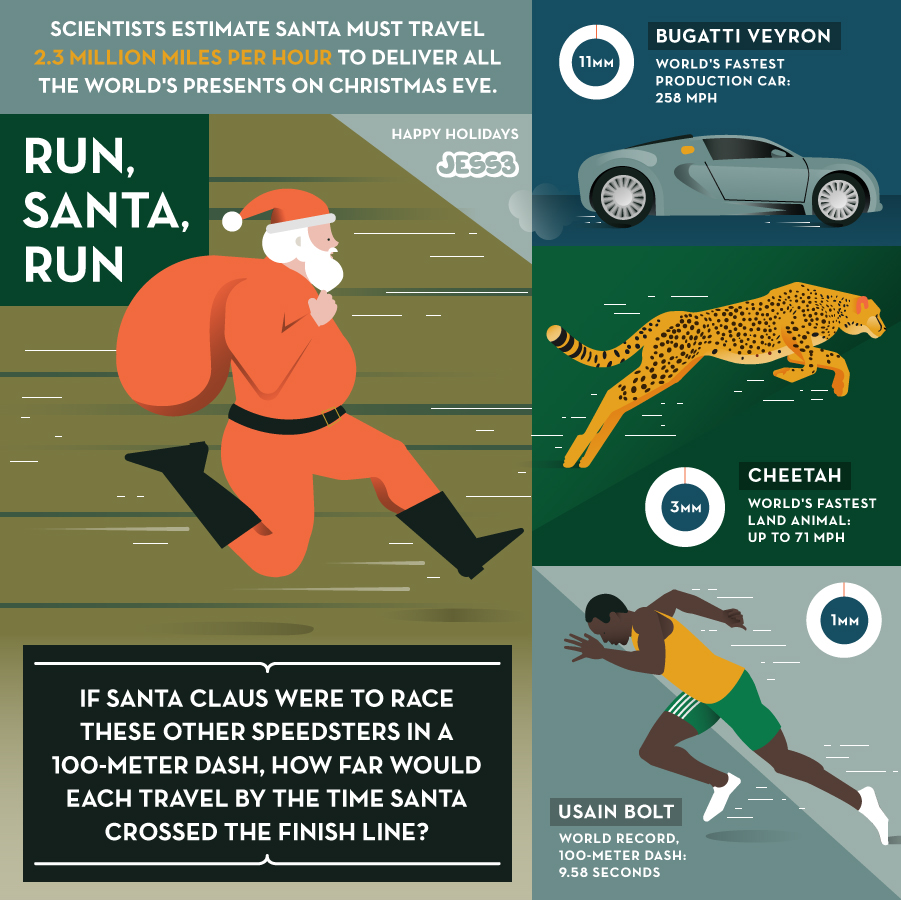 Calling the race a blowout is like calling the Sun kinda shiny. Santa would absolutely demolish Bolt’s world record, crossing the finish line in .000096 seconds. In the same amount of time, Bolt could cover one millimeter, while the Cheetah would be a bit further at three millimeters and the Bugatti way ahead of both at 11 millimeters. If any spectators blinked, not only would they miss the entire race, but Santa would be long gone from the track. In fact, in the time it takes to blink an eye, about 300 to 400 milliseconds, Santa could travel from Washington, D.C. to New York City.

So this Christmas Eve, while you’re waiting by the chimney for Santa, just remember: by the time you hear the sonic boom, he’ll already be long gone. If you want to catch him, just use the Google Santa Tracker to watch online as he works his magic.