According to a 2010 Wikimedia Foundation study, “less than 13% of Wikipedia contributors are female.” Pretty alarming statistic, considering Wikipedia is the #1  reference site on the web and whether we realize it or not, our gender frames our experience and our priorities when it comes to codifying concepts, terms, and history.

To help even the score, DCWW, (DC Web Women), GROW (Girls Rock on the Web) and 1×57 hosted a half-day “how to” workshop on Wikipedia editing (targeting a female audience) at the JESS3 DC office to train an army of female editors. Look out: we are armed with knowledge. 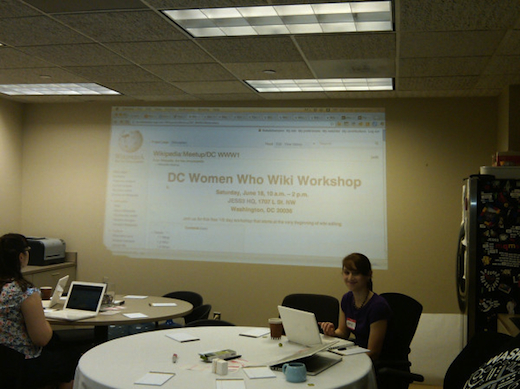 Amy Senger and Steven Mandzik (cofounders of 1×57–and trainers on the CIA’s Intellipedia) along with some help from Andrea Baker (Manager for Systems of Engagement Development for AIIM International–and also an Intellipedia trainer), Kirby Plessas (Plessas Experts Network, Inc) and DCWW, instructed 23 women and 2 men on techniques, tools, and etiquette of the Wikipedia world.

Most of the attendees were women already involved in technology — they represented government agencies, NGOs, libraries and private organizations. While some had had experience with Wikipedia before, they each expressed a concern for women’s “lack of voice” amongst the Wikipedia community. They agreed that even though it was important for their voice to be heard, there was some underlying intimidation with the editing process that prevented them from fully participating.

During the workshop, each individual:

Curious what else we covered? Check out our entire agenda on Wikipedia here: DC WW1 Agenda.

As the participants learned the nuances of writing pages, challenging corrections, and engaging in Wikipedia dialogues, their confidence grew. By the end of the afternoon things were ROCKING– self-assurance, enthusiasm and understanding of the Wikipedia community DOMINATED the workshop.

It was FANTASTIC for JESS3 to both participate and witness the transformation from feelings of hesitancy to empowerment. Everyone seemed motivated to act! Sue Gardner, the executive director of the Wikimedia Foundation, said to the New York Times that their goal is to set “to raise the share of female contributors to 25 percent by 2015.” Hopefully, as long as the group stays enthusiastic, the 2015 Wikimedia Foundation study will demonstrate the success of this workshop and similar endeavors.