Looking back over the last twelve months, there are so many things we’ve improved upon and so many things in which we’ve taken pride. If we were to narrow in on eleven areas that delivered the most #winning for our clients and for our company, the list would look a little something like this…

1. THE ZEN OF STEVE JOBS. We collaborated with Forbes to bring to life a graphic novel about Steve Jobs’ time in Japan — aptly called “The Zen of Steve Jobs.” What started as an idea Jesse had a few years ago has grown into a full-scale, 80-page graphic novel that has been published by Wiley and available everywhere from Amazon to Barnes and Noble.

2. ANNIVERSARY CELEBRATIONS. We helped Wikipedia and Google Earth celebrate their 10th anniversaries, Social Media Club its 5th, VEVO its 2nd and Amnesty International its 50th. Our founders Jesse and Leslie also celebrated 5 years of their partnership, joining DC-area co-preneurs Frank Gruber and Jen Consalvo who also celebrated the big 5 with their company, Tech Cocktail, this year.

3. MAJOR GROWTH. In 2011 alone, we saw a 114% increase in our revenues, 59% increase in our team size and 142% increase in page views to JESS3.com. With this growth has also come the ability to strengthen our infrastructure, improve processes and execute more complex projects.

4. NEW TEAM MEMBERS. The addition of Lauren, Bonnie, Brad, Beth, Jenny, Trey, Travis, James, George, Simon, Nikki, Mark and Mona this year — and Sheri starting early January — has fortified an already stellar team. They each share our passion for the Internet and each has shown true mastery and dedication to their respective crafts.

5. AWARDS & RECOGNITION. We were honored with a Peabody for our design of the C-SPAN Video Library and recognized by IdN, W3, The Webby’s, Communication Arts, The Computer Arts Project and SXSW for our interactive and motion work. Our co-founder Leslie was named one of the “Most Influential Women in Technology” by Fast Company, while the Washingtonian named Jesse and Leslie “Tech Titans” and one of the top entrepreneurial couples in the DC area. Our work has broken through an otherwise crowded landscape to earn critical acclaim in over 3,000 media stories over the last two years– and we are just getting started.

6. WINNING THE INTERNET. We’ve been refining our approach to content creation for nearly a decade. To truly ‘win the Internet’ we’ve found that the content needs to tell a larger story, be entertaining, add value and be beautifully designed. Just a few of our most shared, most successful and most written about projects this year have included: Who is Occupy Wall Street Infographic (with FastCompany), The Geosocial Universe v2, JESS3 QR Art, The ProBook (with Eloqua), The Future of Solar (with GE), The Content Grid v2 (with Eloqua), The Twitterverse v2 (with Brian Solis), The Future of Domains (with The Washington Post), The State of Wikipedia, posters for Google LA, the Women’s Economic Opportunity Index (with The Economist), and The Social Media Brandsphere (with Brian Solis).

7. SLIDESHARE. While we’ve grown to maintain nearly twenty profiles on everything from Angel List, Vimeo and Dribbble, to Wikipedia, Tumblr and Behance, one channel has driven more views-per-presentation, more new relationships, more tweets and more new business than any other. We’ve hit the front page with every major presentation we’ve launched this year, which has helped drive over 300,000 views to our PDF, Keynote, PowerPoint and video content. Our top presentations include: Visualizing the Agency of the Future, The World of Social Objects, The Art of Social Design, How JESS3 Built Its Following, Five Defining Moments in the History of JESS3 and Data Visualization Meets Visual Storytelling.

8. DATA VISUALIZATION. Our dedication to the craft of data visualization dates back to 2002 and burns as brightly as ever today, as we visualized millions of tweets and thousands of check-ins for some of the year’s biggest events: from CES to the Superbowl, SXSW to LeWeb. We are proud to be one of the pioneers in this space and promise to continue to deliver hypercreative approaches to big data sets in 2012 and beyond.

9. MAKING MOVIES. With ESPN, we animated paper and danced with puppets to tell the story of how TV ratings work. With the UN, we animated their call to action for their mobile campaign which donned the hallowed screens of Times Square. A Mad Men moment, to say the least. With Agilent, we were inspired by Tron to tell the story of “The Evolution of Radio Waves” and with The Economist, we brought a 150-page white paper to life about the global economic opportunity index for women. All told, we’ve produced over a dozen “web movies” over the last two years and we can’t wait to keep pushing mixed media, image making and animation to new levels in 2012.

10. AMAZING CLIENT PARTNERSHIPS. We are entering our second, third and even fourth year of partnering with an amazing group of clients. The teams at Google, Facebook, Twitter, Intel, Samsung, American Express, Microsoft, NASA, AT&T, Eloqua, Forbes, GE, The Economist, ESPN, MTV, NBC, Red Bull and foursquare have provided the trust and purpose for us to create breakthrough work — we thank and salute you!

11. SUPPORTING THE COMMUNITY. As our root system deepens and expands across the United States (and the world!), we are proud to help sponsor and donate work to the organizations that are making a difference in the many communities in which we occupy: from Amnesty International, DC Web Women, Zoetica, Women Who Wiki, Open Air and Change the Ratio to RefreshDC, Tech Cocktail, Social Media Monthly and Social Media Club. We are also proud supporters, users and evangelists of Etsy, Uber, Harvest, HelloWallet, Basecamp, Blinksale, GitHub, Facebook, SlideShare, Twitter, Vimeo, Delicious, Dribbble, FFFFOUND, Forrst, Behance, Flickr, Linkedin, Quora, YouTube, CrunchBase, Tumblr, Visual.ly, Pinterest, and AngelList.

To everyone: Thank you for believing, tweeting, liking, sharing and supporting us throughout 2011.

We stretched, reached, grew, improved, learned, won and created more this year than in all previous years combined.

We could not have done it without you. We are infinitely grateful.

With love,
Your friends at JESS3 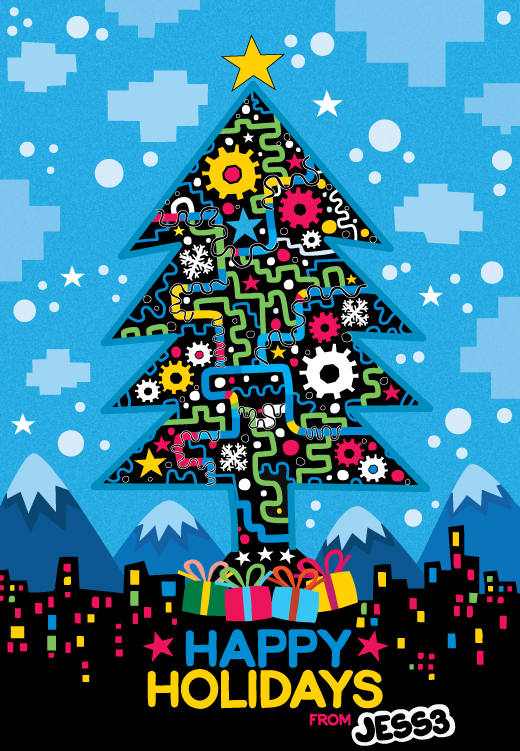