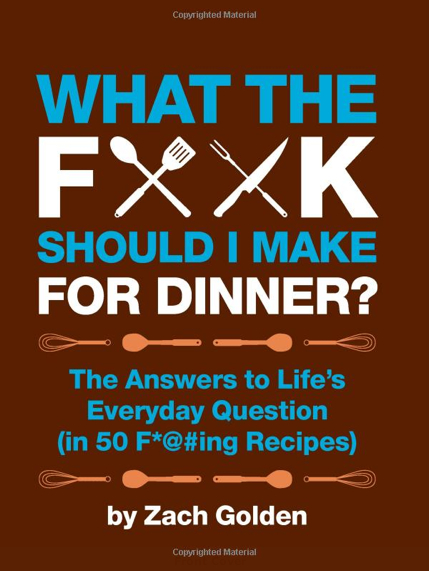 I met Zach Golden, creator of What the F*@# Should I Make for Dinner? (WTFSIMFD), at the Nonick Conference in Bilbao, Spain earlier this summer. WTFSIMFD hit the interwebs hard in 2010; being picked up by the likes of The Huffington Post and Boing Boing, getting nominated for a Webby Award, and inspiring several knock-offs, like What the F*@# Can I Do for Seals? and What the F*@# is a Sloth?. Zach even landed himself a book deal! He credits success to his “own indecision and hugely f*@#ing vulgar mouth.”

Besides WTFSIMFD’s obvious appeal to a food geek like me, I really dig its choose-your-own-adventure-like functionality. The brand has a minimalist design and a great use of typography. 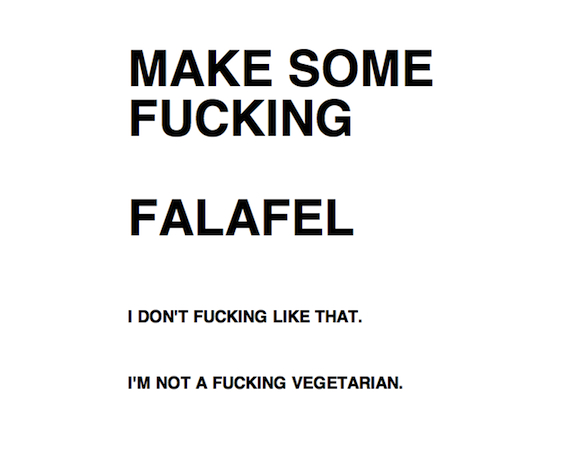 I chatted with Zach to find how he keeps WTFSIMFD relevant in an age when Internet memes can be forgotten within a week (remember double rainbow guy?), and how he made the transition from website to the printed page.

How did the site start? Where did you get the idea?
I created What the F*@# Should I Make for Dinner? because of my own indecision and hugely f*@#ing vulgar mouth. After working late for a few years in a row and trying every takeout place that would deliver to my apartment, I decided that cooking was probably the most legal, moral, and pragmatic way to spice up meal-time. That sounds great, but the difficulty in actually procuring ingredients is compounded by the need to make a decision about what to cook, not to mention cooking it without dismembering oneself or creating small fires in an enclosed space. So one day, with hunger knocking, I queried, “What the f*@# should I make for dinner?” I got the idea to make a website that told you what the f*@# to make for dinner, and I sat down, figured out how to make the website work, and built it in 3 hours time. Then I got take out, because in all of the hustle and bustle of building the site I became too distracted to make a decision for dinner. I believe I had sushi and if I recall correctly, it was fair.

When did you know it was a hit?
When my grandmother posted on Facebook, “Check out my grandson Zachary’s f*@#ing website.”

How did you first start to consider extending the life of it, and what were the first steps you took?
People started emailing me saying how the site had become a utility (in helping them decide what the f*@# to make for dinner), and that coupled with 1,000,000+ hits a day traffic helped me realize that the site needed a social outlet to reach out to fans.

I tinkered with their suggestions and created a Facebook fan page, ultimately the fan page was all that stayed; it’s become a very weird community, people will post daily what they had for dinner, and if you don’t use “f*@#” in your post, you will get called out.

How was the transition to physical media (the book) been?
It’s very different from digital media, a lot more people are involved and too many hands generally don’t make for a great final product, but my publisher, Running Press, has been fantastic.

Were you approached about the book, or did you put feelers out to publishers?
I was approached by a few publishers and had meetings with all of them. Ultimately, Running Press had a great vision for the book that was conceptually consistent with the website. My editor and I called each other on the same day to suggest a “choose your own adventure” format, so it felt like we were on the same page.

What is your strategy moving forward?
To figure out how to buy a hovercraft.

How do you feel about all the imitator sites that have popped-up? Is imitation the sincerest form of flattery?
Some of them are way cooler than my site. I have no illusions that I have any sort of ownership to the word “f*@#.”

Was there an existing relationship with Cookstr before you started the site? Or were you just a fan?
I had the good fortune of meeting Will Schwalbe from cookstr.com after the site started. I was dealing with a few recipe sites initially and it was a giant headache. When I met Will and learned about Cookstr, it felt like a natural fit. The recipes are amazing and ultimately it’s the best way to serve my users, which is how I try to frame all decisions for the site. 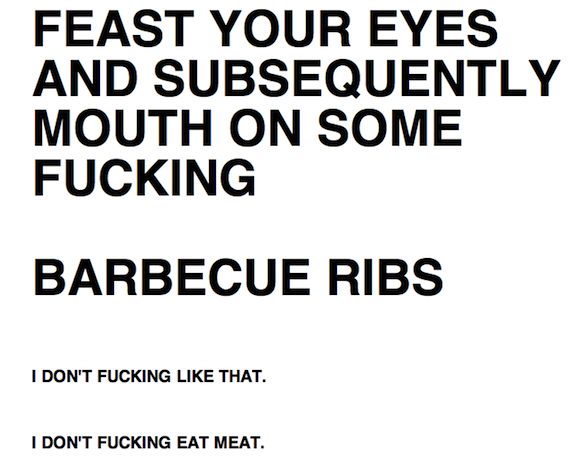