I was sent a link for mosoto.com 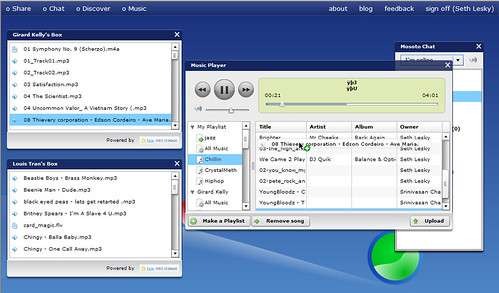 Facebook released an API last year and new startup Mosoto is putting it to good use. Mosoto is a Flex 2.0 application that sits on top of your Facebook account via the API and allows you to share files, chat with friends, and discover new ones. The app has a desktop layout, where you control different mini applications for sharing files, chatting, discovering friends, and sharing music. And what struck me as awesome was the ability to login with your facebook identity and pull up your information into their layout. I predict we will see lots more of these sites. Open source has always scared big companies because giving away their code seems like giving away the secret sauce. I think any company with an API should be thinking “.. What if a company comes along and builds something better and allows all my customers to transfer their content to the opossing service..”, basically making it easier than normal to jump ship and switch providers.

If social networks were banks, interest rates and atm locations would be the issue. If bank A can cut interest rates by not having as many tellers and atm machines, and builds a base around those cheap rates and services.. And then bank X comes along and says well give you those same rates and well will provide atm machines everywhere too.. And we will allow you to keep your same pin number for the atm machines..

So on one side we want to open the doors and let people (including our competitors) share information freely.. and on the other hand.. We need to make money and hold our cards.. Bottom line is people are winning when this kind of shuffle happens, our thoughts are taken into consideration.. And in some cases are the deciding factor.

So, lets come up with some new ways to use facebooks api and play the reindeer games.