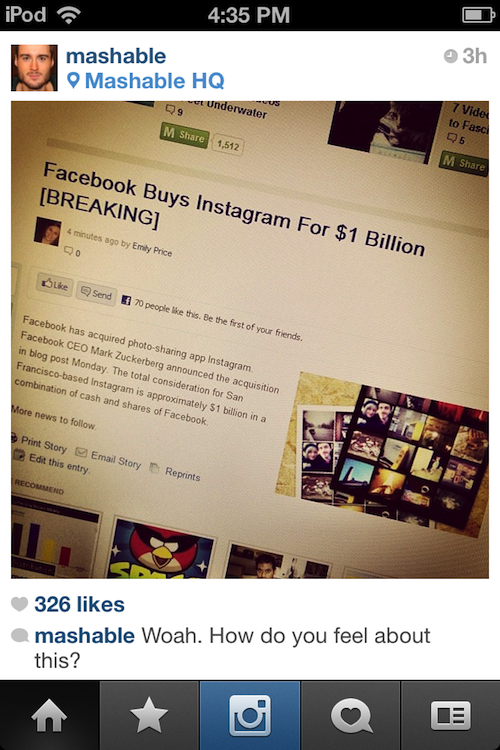 When word came down from Mark Zuckerberg that Facebook acquired Instagram, many people had immediate, strong, and diverse reactions. Some applauded Facebook for making a substantial purchase before its ever-looming IPO. Others decried the move as a shallow attempt for the company to buy some cool points and mystique, or simply take over one of its biggest competitors. Others still are concerned, as Instagram users, that their interactions with the app will be compromised now that Facebook is behind the metaphorical wheel.

As fans of mobile content creation (have you seen our latest mobile uploads collection?), we know the challenges that lie ahead. For one thing, Facebook’s history of acquisition is littered with shutdown startups like Gowalla and diminished communities like FriendFeed. For another, how will Facebook cope with Instagram content that’s not Facebook-friendly? Facebook hasn’t hesitated to censor (potentially) controversial content in the past. Will Instagram suddenly have additional standards for what content is questionable? The simple answer: we don’t know. So before rushing to a hasty judgement, we considered a plethora of possible outcomes. In doing so, the JESS3 team and I distilled these ideas down to three “If…” statements:

So, to reiterate, I have no idea what will come of this. No one does yet. But no matter what happens, one thing’s universally understood: this was a big move. Wired reports the billion-dollar sale nets CEO Kevin Systrom $400 million. Wall Street Journal Marketplace Editor, Dennis Berman, put the total sale in context when he tweeted:

Andy Baio of Wired put together this chart, comparing Instagram’s ‘Cost Per User’ to that of other notable sites that have been acquired in the past 10 years.

If we look strictly at the acquisition cost per user, Facebook got a relative deal with the Instagram purchase, paying roughly $28 for each of Instagram’s 35 million users. (The median cost across all the acquisitions is about $92 per user.) 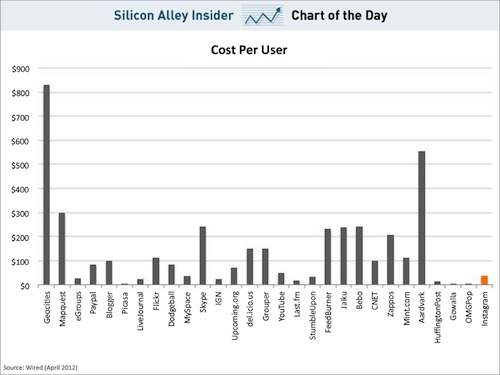 H/t Rachel Sklar for some of the links used here.