Ticketmaster’s new interactive seat maps combine two things that I absolutely love: social media and music. Now, as soon as you load a seat map on Tickmaster’s site, you see where everyone you know at the concert is sitting. The interactive maps pull data from ticket-buyers’ Facebook profiles.

To learn more about Ticketmaster’s interactive maps, I caught up with the company’s CEO Nathan Hubbard about the inspiration for the maps, how Ticketmaster protects fan privacy, and what’s down the road, including geosocial developments. 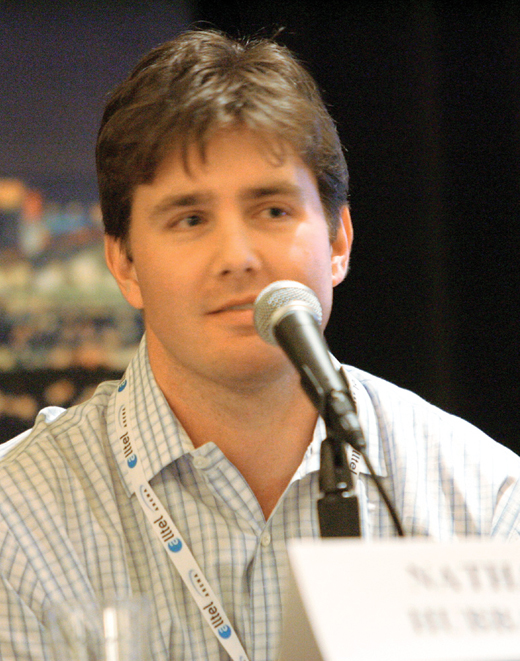 Jesse Thomas: How did the idea come about to pull Facebook data into Ticketmaster’s interactiveseat maps?

Nathan Hubbard: We are laser focused on making the experience of buying a ticket and going to an event awesome. A big part of that is expanding the passion and energy of a live event into the digital space before, during and after the event. Social is the best platform we know of to do that, because event going is an inherently social experience. We sell almost three tickets per order. So first and foremost, we wanted to make the crowd come to life in the digital space. Secondly, one of the challenges in our industry is awareness of events. Historically people have used social to talk about what they are doing in real time, or to share what they’ve done through photos and posting. But that means people don’t always know about an event until after it happens. So we wanted to use social to spread awareness of events at the moment of purchase to drive awareness. Lastly, we wanted to make it really easy for people to coordinate their experiences, sit together and find new friends. The seat map is the perfect vehicle to do all of this.

Jesse: What has the response been to that data?

Nathan: This is one of the most well received innovations Ticketmaster has announced in recent history and the response continues to be phenomenal. Fans are using this new feature to expand their group of friends attending an event. They are using this functionality to help plan their event and coordinate the logistics of everything from travel to where to sit. And as a result it is driving new levels of awareness and engagement.

Jesse: What privacy protections did you put in place to avoid problems?

Nathan: Throughout the development and integration of Facebook into our interactive seat maps we carefully thought through privacy protections for our fans, as the safety and welfare of our fans is paramount. To that end, we made it so fans always had to opt-in first before their seats were shown on the map. Also, whenever fans opt in, we always give them the option to choose if they want to share with everyone or just their friends.

Jesse: Have you encountered any privacy concerns from anyone nonetheless?

Nathan: No, but we’re always listening. We made it very easy for fans to share or not share their event going information. Our fans using this feature haven’t notified us of any privacy concerns. The response has been uniformly positive.

Jesse: Is the interactive map available at all venues where Ticketmaster sells tickets?

Jesse: Is there any geosocial element to make seating purchases or arrivals available inreal time, or is that down the road?

Nathan: We’re one of the few ecommerce companies that gets to connect with each of ourcustomers in person. They tell us where they will be at a given date and time, down to the exact seat location. So enhancing the event with geosocial is a cool part of the evolution of the experience and part of our roadmap ahead.

Jesse: Are there certain venues or types of concerts for which you’re seeing heavier useof the interactive seating maps?

Nathan: So far, we’re seeing the most tagging activity in concerts and sports games, but theater and family shows are definitely getting their share of tags as well. Some of the most
tagged events have been the US Open games, NASCAR, and college football. But the most tagged event to date is actually Bone Bash XII with Judas Priest at Sleep Train Pavilion in Concord, CA.

Disclosure:  JESS3 has proudly worked with Facebook, which is referenced in this interview. 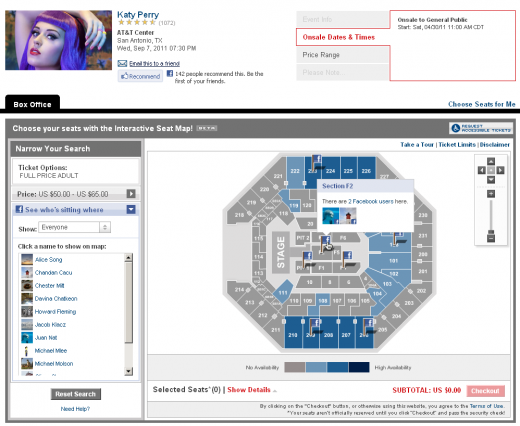 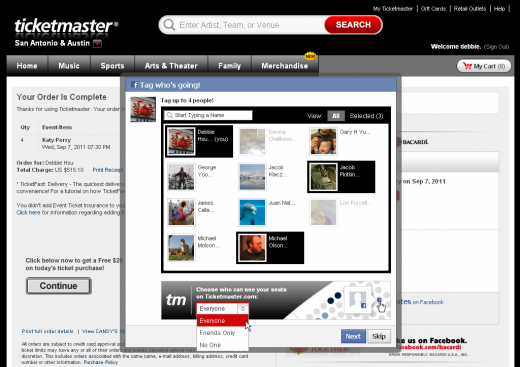 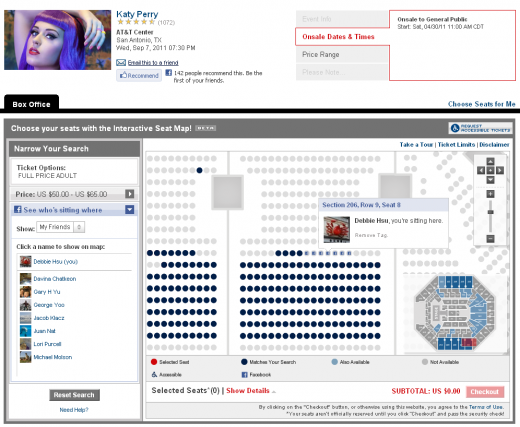