Foursquare, Yelp, Google location sculptures and how it all reminds me of Kodak Moments at Disney World.

I have started to realize the potential of individual store owners to leverage this platform. We are building an exciting system for Busboys and Poets, Eatonville and Luna Dinner (all locations) and it pulls in the tweets (they manually favorite the tweet they want to show up so that no trouble makers can game the system, like me…) and we are also pulling in the Mayor of each location. 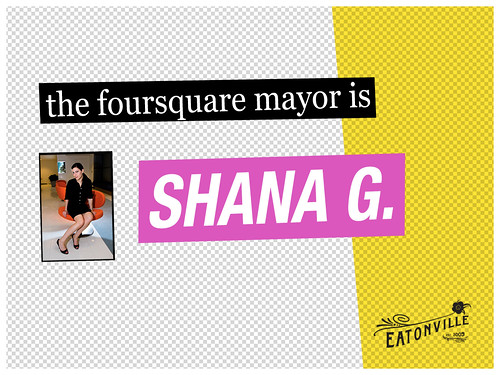 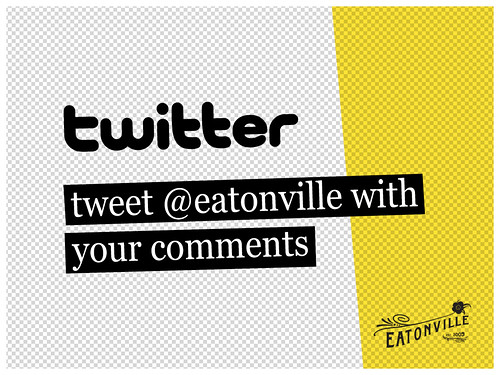 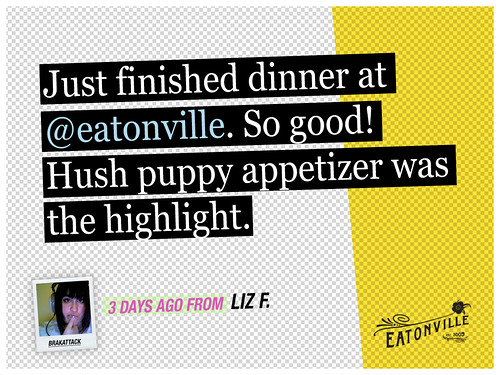 I have been trying to convince them to give away a free drink with every meal the Mayor buys, or some kind of sweet “FourSquare Mayor only deal”.

A while back I started to think that Yelp + Foursquare would be a killer app.

Charlie O’Donnell says “Think about it from Yelp’s perspective. Yelp helps you figure out where to eat, and gives you recommendations, but it only knows about the people who write reviews. That represents only a small percentage of the overall Yelp traffic–so while Yelp tries to make the business case for advertising and using it’s retail services, it doesn’t really know how much real live foot traffic it drives. Foursquare is the missing link, enabling you to come full circle from a review or recommendation to an in person visit from a real customer. Best of all, it has figured out a compelling reason to get you to submit that data–in the form of a fun game you play with your friends.

Additionally valuable is that the game syncs up with Twitter and Facebook, so Foursquare users are telling the world where they are and the places they’ve visited at any given moment.”

At JESS3, We are integrating FourSquare into our new exciting iPhone app StadiumStream. 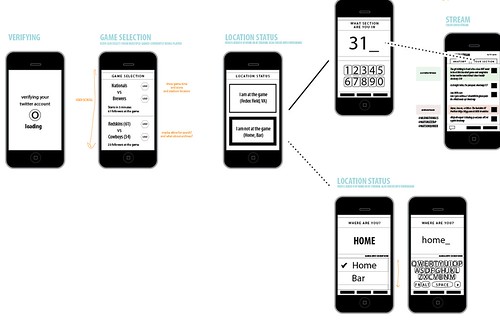 Here are a couple interesting examples of inspiration, 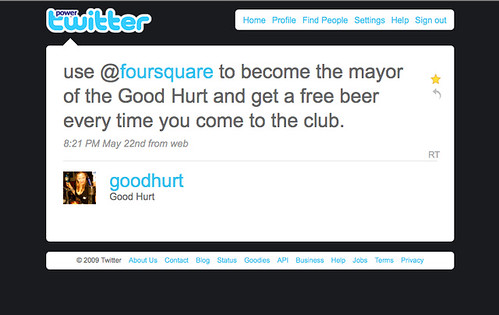 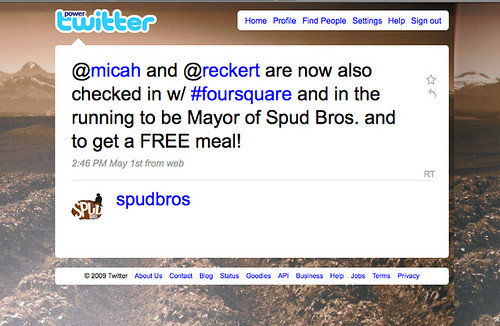 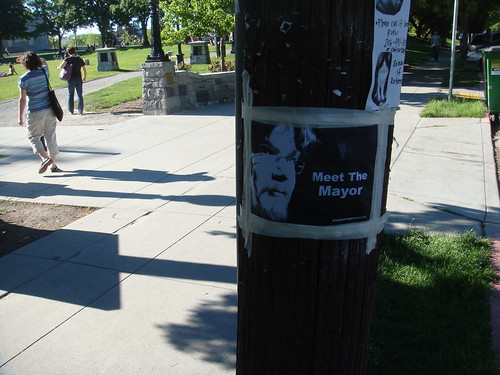 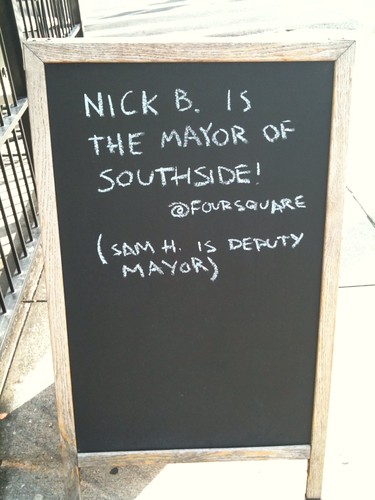 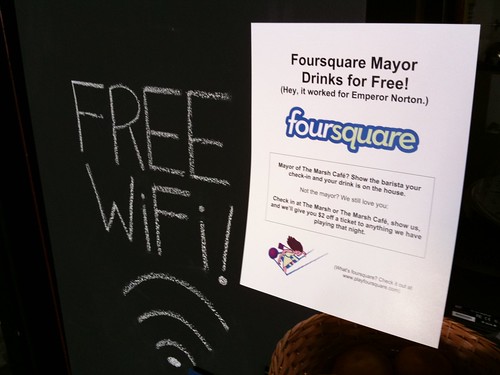 foursquare says “While we’re feverishly working on the stuff that will make promos like this look pretty in the iPhone, local bars, cafes and coffee shops are doing it guerilla style with flyers and Twitter.”

at SXSWi when foursquare was released I remember Digg got a custom badge for their Digg Shindigg party, and a few others as well like the Karaoke RV. This is a smart way to get branding in at a low barrier to entry, kind of like Facebook Gifts. 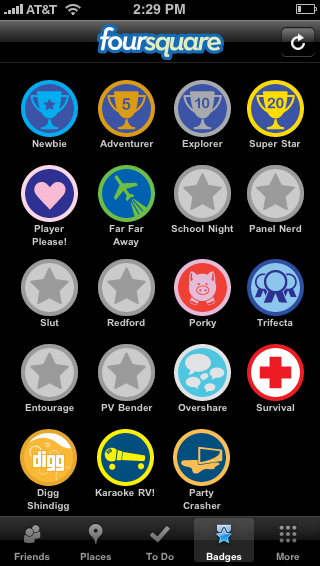 some other great posts on TechCrunch and Fred Wilson and I saved all my research on delicious. 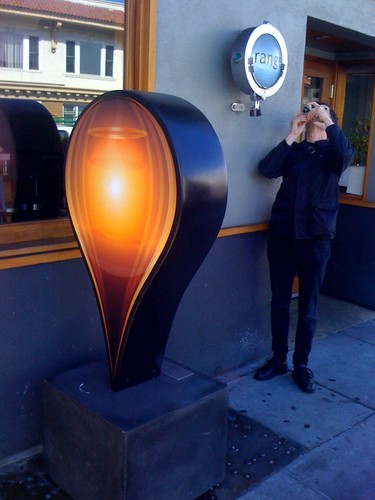 “Each statue has its own name plate. For instance, the Google gorilla in front of Foreign Cinema says: “Tiffany Shlain has chosen Foreign Cinema as one of her favorite places in San Francisco. Visit google.co/favoriteplaces to see more. Google Maps. Summer 2009.”

I think what google has done with these “kodak moment spot” inspired sculptures in key places around the country is a great idea. This to me shows how a standard location pinpoint can be the meeting point or location of record for a business. When you look at that low tech flyer for the foursquare promo, or our slightly more hightech social media display for eatonville, I cant help but put the dots together and see the that business owners are going to have a key check-in point at the door. The google example shows how large and obtrusive they can be.

I believe in the next wave of innovation we will see real time feedback, when you walk by something or walk into a store, your photo will show up somewhere, or your name will light up.. The key to that technology is no click check ins.

I think in the future google or someone will put little micro chips somewhere and that will serve as the official check in point.

Kodak Moment Spots are found in Disney parks. but you also see this kind of thing all over the world where a person or a group of people pose in a natural setting in just the right spot, or a cosmetic setting that has some funny gag to it. Like putting your head in side the statue of liberty. Or even the urban clubs have those popular backdrop photos, or the asians love printing stickers and making content like this. 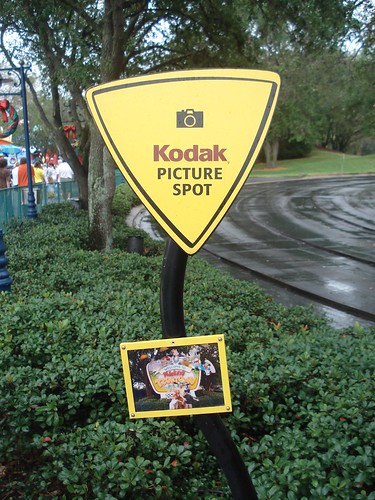 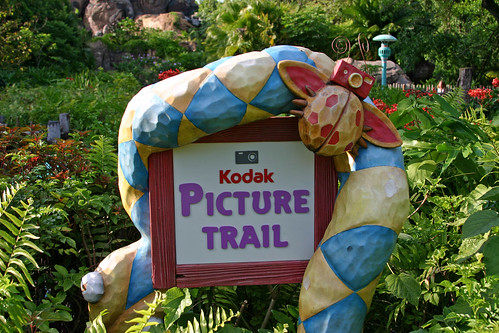 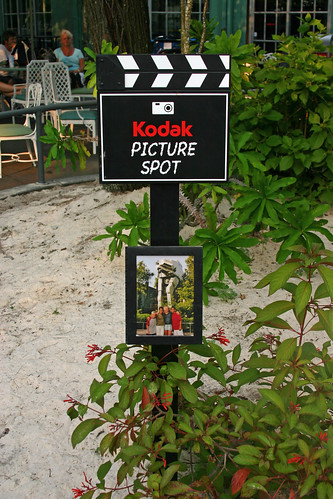 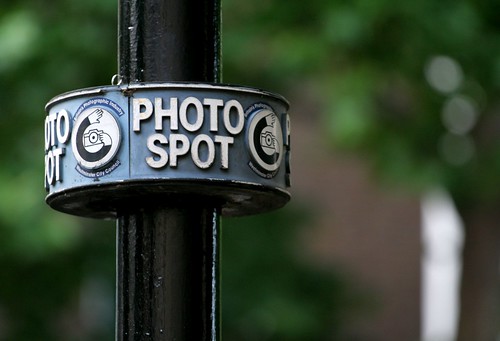 What are Kodak Spots?

In the case of the expression Kodak spots, this was a connotation that was created by Kodak in collaboration with Disney. All over the different theme parks in Disney you would be able to find Kodak-sponsored signs with the words “Kodak Picture Spots.” These are specific areas around the different areas around Disney theme parks that have been considered as favorites of tourists. The selection of these spots was also made with the help of professional photographers. These Kodak spots were selected as perfect places to help you tell more about your visit through your pictures. Just like the case of the Kodak moments advertising campaign, the Kodak spots around Disney stuck. When someone now points to a particular location and calling it a Kodak spot, it means that the site is not only a picturesque. Kodak spots are those places that could provide you a story to the picture that you take.

I bet we will see google and the like copying the kodak moments campaign,

It is a Kodak Moment!

As the years went by, Kodak began to face a lot of stiff competition from other companies. In order to maintain its status as the leading imaging and photography company, it launched a series of commercials as part of its advertising campaign. The tag line that was used for this advertising campaign was “These are the moments. Kodak moments.” The advertising campaign was simple yet eye-catching. The commercial featured scenes that happen every day which are then preserved through the use of the films and cameras from Kodak. Some of the scenes that were included as part of the advertising campaign were a baby taking his first step or a child caught off guard as a frog jumps away. The advertising campaign worked. Kodak was able to strengthen its hold on its position in the market. But the advertisement did something that the company never expected. That is, that the tag line Kodak moment would become extremely popular to the point that it has become a common expression. Today, when a person calls something a Kodak moment, it means that the situation or event is so priceless that it is worth being preserved forever in a picture.