Last month, thousands of artists teamed up online to collaborate on one art project. A Reddit user had openly invited others to illustrate a communal canvas with colored pixels. The only catch? Each artist had to wait a turn after placing a tile. This single rule encouraged creative collaboration by forcing artists to build off each other’s work. In the text post, the user expressed the end goal of the project by stating, “Individually you can create something. Together you can create something more.” 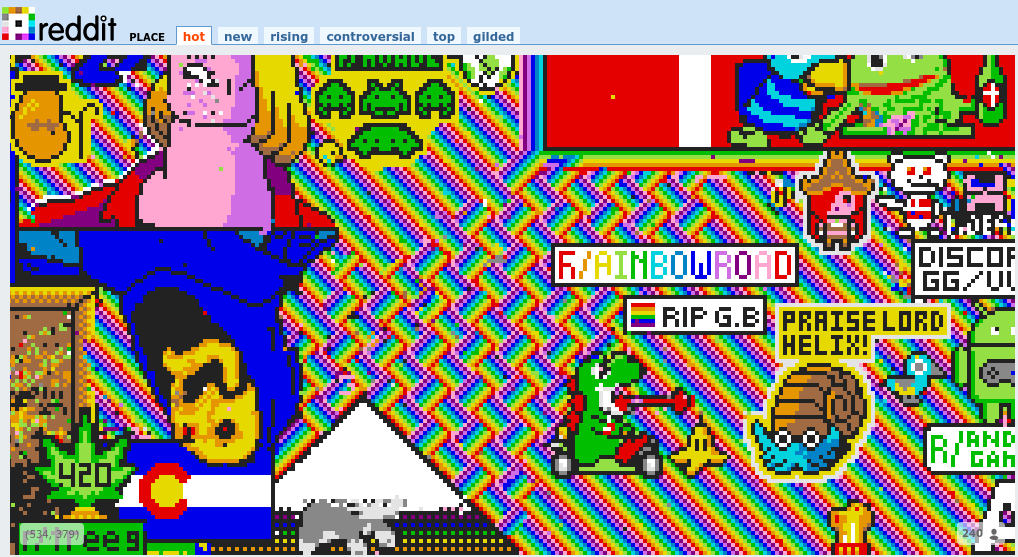 The concept of collective art isn’t something incredibly new. In 2009, Twitter users joined forces to write an opera for London’s Royal Opera House. The indie rock band, The Vaccines, invited fans to submit their Instagram photos to be used in one of their music videos. After receiving nearly 3,000 submissions, the band pieced together a montage for their song, “Wetsuit.” Even before the term, “crowdsourcing” was coined, it was a common practice. Wikipedia, being the encyclopedia created by people all around the world, is probably the most well-known example of this.

While creative collaboration isn’t a foreign concept to artists, using the web for it is somewhat new. From a global perspective, the potential is huge because there’s more opportunity for artists to connect with each other from all ends of the earth.

So where’s the problem? In many cases, artistic crowdsourcing can lead to lower quality of work. For example, a business may send out an open job invite to artists. Once the request is made, artists submit work that’s created specifically for the project at hand. In the end, one artist wins the job. This results in subpar submissions for a number of reasons. Most of these projects have tight deadlines, causing the workmanship to be rushed.

Secondly, the method of crowdsourcing forces artists to churn out a number of submissions for different clients in the hopes of landing at least one. With their focus being spread out to different industries, they lack the dedication and study needed to create one memorable piece of work.

When used correctly, crowdsourcing can be a good thing. Ultimately, its biggest strength is that it cuts cost for the client. Additionally, it gives lesser known designers more job opportunities. When crowdsourcing fails is when the task needed is not a simple one. To put it bluntly, you’re paying for what you get and when you send a job out to the masses, a simple salary will equate to a simple job done.

To make the most out of crowdsourcing, there’s a few things businesses can do. For starters, don’t be so cheap. As stated above, the amount of money you’re willing to invest in your talent almost always correlates to the quality of work you’ll receive. It’s also important to be specific about the task that’s needed to be done. Creative collaboration is great, but if you’re managing a random team of contractors, it can often lead to a hot mess of different styles and approaches. Be specific about what you expect from each artist that you’re working with.

Lastly, when seeking feedback on a specific project, ask the right audience. For example, the feedback you receive from an experienced UX designer on a new mobile app will be much more beneficial than a random assortment of survey takers who are strangers to the field. Similar to investing in talent, business owners should also invest in the invaluable insights from seasoned professionals when seeking feedback.

Just like the Reddit user stated in the text post, collaborative art should be used to create something more. As long as that’s your honest intent, you should be able to do just that.