What’s the difference between a good infographic and a bad one? Recently, we discussed this idea with some of our peers in the Society of Digital Agencies (SoDA). In part 1, I take the editorial perspective on good infographics. Tomorrow, in part 2, our Information Design Director, Tiffany Farrant-Gonzalez, will tackle the design perspective.

A while back, JESS3’s President/COO Leslie Bradshaw made this list of essential qualities of a good infographic:

(Hat-tip to Leslie for developing this list, but I take full credit for reordering it to make the acronym UBER-PIE. Mmmm…pie.)

I have total faith in our designers to take care of Beauty, so as a strategist/copywriter/editor I focus on the other six. Here, paired off, I’ll break those down. 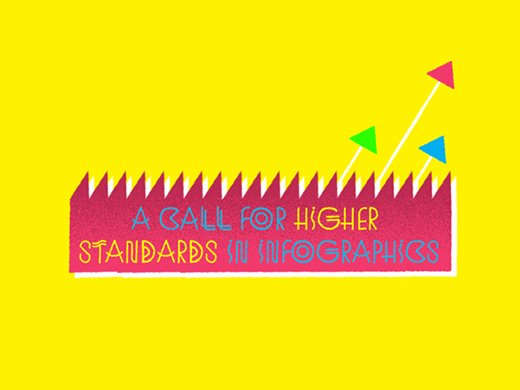 Utility and Promotion
The primary purpose of an infographic is to spark informed conversation and action. That means having a point of view (promotion), but also expressing it in a way that empowers the audience to speak or act (utility). Your job is to set the tone for the conversation, which means speaking the audience’s language (one aspect of relevancy; I‘ll get to the other in a minute). Is it a conversation for the boardroom or the barroom, the ladies’ room or the locker room? Be intelligent and tell them something they don’t already know, but say it with words and terms they do.

Integrity and Relevancy
You have to be direct, but you also have to be correct. I love data because it can capture so much truth about the world that our senses can’t, but the downside is that that truth is essentially meaningless if it isn’t put into context–and it’s some combination of moronic and unethical when it’s inaccurately contextualized. Use data that’s true to your message, but also true to your audience’s lives (that’s the other end of relevancy). So, do your homework. Know your data and your audience, because you can be sure they‘ll know if you don‘t. To bastardize the tagline from Alien: on the Internet, everyone can hear you fail.

Entertainment and Excellence
Above all else, a good infographic needs to be interesting. You have to offer your audience something that will either shift or sharpen their worldview, but you can’t accomplish that if you’re so long-winded that you lose their attention halfway through, and by the time you’ve made your point they’re watching videos of cats jumping out of cardboard boxes.

Remember the lesson of William Henry Harrison, best known as America’s shortest-tenured president. At his inauguration, Harrison waxed poetic for nearly two hours through freezing rain; a month later he was dead. The lesson: know when to shut up or die. Make your point quickly, clearly, accurately, and interestingly, and then leave it to your audience to interact with it as they please. And with that I’ll shut up and leave you to go write your own stories.