As a woman and as a business owner, I want to dedicate this post to the celebration of some really amazing achievements in the business world. I often employ equal parts optimism — for what can and should be — and realism — for what is and has been. But today, I want to talk optimistically about what it means for more women to be obtaining higher levels of education and heights in corporate America. It means women are acquiring the skills and building the networks necessary to take on the next frontier: entrepreneurship.

Believe it or not we reached parity in higher education three decades ago: women passed the 50 percent mark in college enrollment in 1979, outnumbering men for the first time ever. By the early 1990s more women than men aged 25 – 29 had a bachelor’s degree or higher, and women were entering the workplace in record numbers. By the end of 2009, women made up almost 50 percent of the United States workforce, including 51 percent of professionals. Progress in the C-Suite is slower but still notable: by 2010, women held 14.4 percent of the executive officer positions at Fortune 500 companies and the percentage of women CEOs of Fortune 500 companies grew from less than one percent in the mid-1990s to 3.6 percent this year.

With higher levels of education, a stronger presence in the workforce and executive roles to the left, right and center of the C-Suite there is, for the first time in history, a chance for women to build and succeed at running their own companies like never before.

According to the second annual State of Women-Owned Business Report, published in March of this year by American Express OPEN Forum, women-owned businesses have grown by 54 percent in the past fifteen years. This growth, faster than that of any other group, is a great cause for celebration. Today in the United States alone there are 8.3 million women business owners.

And while not every start-up company will reach the dizzying heights of Instagram or Zynga, every single women-owned business, regardless of its size, adds to this success and is a big indicator of women’s increasing business power. This moment feels like a movement. Maybe because I am a part of it. Or maybe because there are more and more stories written about women founding companies, being successful and even selling them for top dollar.

My company, JESS3, was thrilled to work with American Express to present their data in a unique and relatable way, championing all women business owners. At JESS3 we believe strongly in the power of visual storytelling and this project allowed us to flex our creative muscles to tell the personal story of some amazing women business owners in new and exciting ways. On behalf of other women in business for themselves, these are stories I am honored to help tell through visualizations of words, numbers and faces.

In addition to the infographic above, we helped develop an array of tasty “snackable” graphics, where we focused in on facts and people that tell the story from different perspectives. These include spotlight graphics featuring some amazing female business owners (and personal heroes), such as Nell Merlino of Count Me In, Rashmi Sinha of Slideshare and Heather Stouffer of Mom Made Foods. 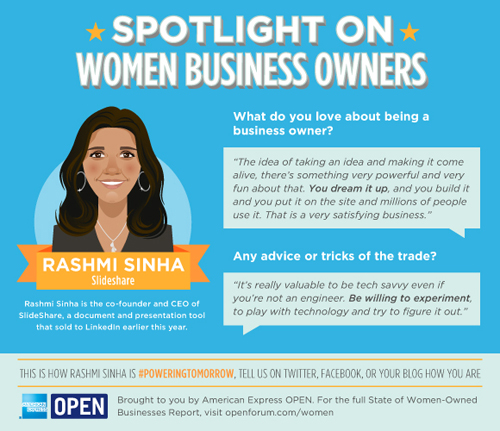 I am proud to be doing my part to power tomorrow by not only leading by example, but by helping visualize what it can, should and will be.

What changes have you seen over the last few decades? Years? What gives you hope or pause? Join the conversation on Twitter by including #PoweringTomorrow in your tweet.