If I were to ask you, what are the top 5 most recognizable brands in the world today, you might think of companies like McDonalds, Coca-Cola, Apple, and Google. But there also some brands out there that aren’t selling anything, some you’d recognize on sight — even if you don’t know quite what they are. You probably pass by one version or another every day if you live in a major city. I’m thinking specifically of BNE, a graffiti artist whose work has popped up all over the globe. 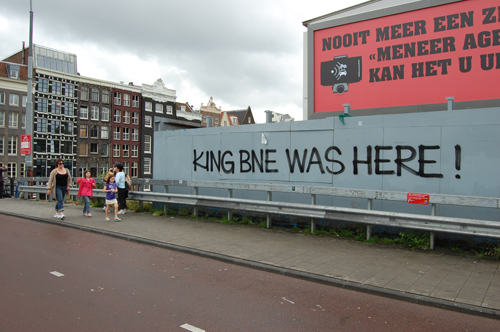 BNE began like most other graffiti artists, tagging walls for the enjoyment and opportunity for creative expression. Over time, the anonymous artist’s travels abroad led to the tag’s appearance in far flung locations, from London to Jakarta. Even as the artist behind it remained unknown, the BNE logo in its various forms became one of the most recognizable brands worldwide. But there was no greater purpose behind the brand. At least, not until last year.

A chance meeting opened BNE’s eyes to one of the biggest but perhaps least well-known problems in the developing world: lack of access to clean water. Over one billion people–more than the populations of North and South America together–don’t have access to safe drinking water. In response to this issue, BNE launched the BNE Water Foundation in 2011.

BNE now focuses on using art and commerce to educate and mobilize people in support of projects to bring clean water to communities. Its current projects include drilling a well in Mulajje Village, Uganda this June. Without the well, students in this town have to walk up to 4.5 miles to collect water twice a day. To get water to drink and wash, they miss valuable time in school and put themselves at risk. The foundation is still raising money to drill this much-needed well.

BNE Water Foundation has turned the traditional idea of branding on its head by giving a purpose to a brand that was already so well known. Most importantly, as BNE explains below, that one purpose is to help people who really need it.

Jesse Thomas: In your mission statement you say: “…I had created a globally recognized brand that offered no product or service,” can you please elaborate more on that statement?

BNE: What I meant is that my tag became ubiquitous to the point that it seemed like a corporate logo. You might pass 5 Coca-Cola logos, 2 McDonalds logos and a few BNE logos on your way to work. The BNE logo has been in the streets for over 15 years and its purpose was never to sell anything. Instead of cashing in on all that brand recognition, I felt it would be better to donate it to a good cause.

Jesse: When you first started out as a graffiti artist, did you ever think you would be the founder of a global foundation bringing clean water to those who need it most?

BNE: No, when I first started writing graffiti as a teenager, I was not even aware of the importance of eating healthy and drinking water. We drank kool-aid and ate poison. I didn’t know that over a billion people were living without access to clean water. So, of course I never imagined that I would be doing this. I grew up poor so I had to help myself before I could help others. No matter how poor I was as a kid though, I always had access to clean water. It’s really unacceptable that so many people are living without what even I took for granted growing up. 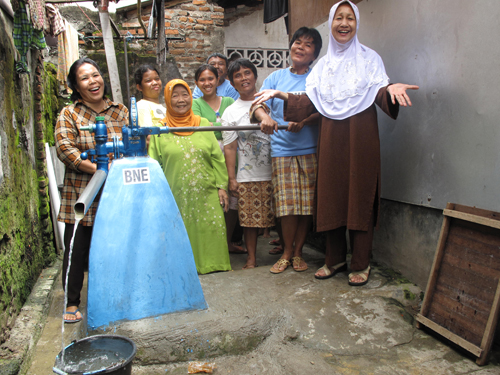 Jesse: Before you founded BNE water, you had ‘a chance meeting’ with an Indonesian woman, please tell me more about this meeting? And why it was significant for you and ultimately led to BNE water?

BNE: I was doing a tag on a wall in Jakarta and a woman said to me something like, “It must be nice to be rich enough to just spray money on the wall like that. If I had that paint I could make this old fence in front of my house look new.” To make a long story short, we painted her fence together and talked for a while. She told me about her life and I learned that a lot of people in her area went without food because they spent a lot on water. At that point I was already aware of the water crisis but after speaking with her I really started to do research and got hyped to do something about it.

Jesse: You say that graffiti is about giving voice to the voiceless, how do you incorporate the recent innovations of the social media in your foundations?

BNE: Until recently I never wanted my work to appear online or in media at all. I never did interviews or anything like that and was content with only having a presence in the streets. Now with the NPO, it’s necessary to get the word out about what we are doing as much as possible. So, we try and keep up with everything on the social media tip. I think that the immediacy of things like twitter and tumblr are great and they definitely help us stay connected with our supporters.

Jesse: What are some of the ways you connect with donors and people in need?

BNE: Connecting with supporters has pretty much been through our website and social media. Luckily people have heard of BNE so it makes things easier than starting from scratch. We partner with NGOs that are already on the ground who have established relationships with communities in need. We work closely with our partners and make sure that our funding is strictly used for actual project costs only (drilling, pipes, cement, etc..). It’s pretty rare in the non-profit sector but I want 100% of BNE supporters’ donations to be used for actual projects and never someone’s salary or airfare. 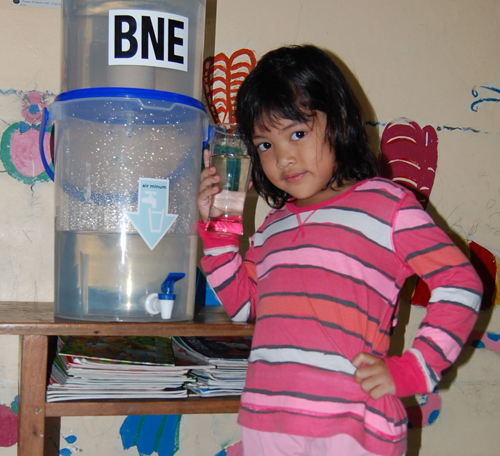 Jesse: Why did you choose water to be the main focus of your organization?

BNE: I chose water because no form of life can survive without it. Water related diseases kill more people than all forms of violence, including war. I chose water because it is a full-blown crisis that needs to be taken more seriously. Providing a community in need with access to clean water gives them the first step needed for economic growth. Water is our main focus but we also aim to educate people about the real causes of poverty and what’s really going on in the world. Foreign aid and handouts will never eradicate poverty. I think that we as humans need to change ourselves and our behavior if we plan to end poverty.

Jesse: You started to express yourself artistically through graffiti, what prompted you to choose that particular art medium as an expression?

BNE: It’s more like it chose me. Graffiti and skateboarding both seem to attract kids from broken homes. I fell in love with both right away. I was rebelling against authority since first or second grade, so both of these things were a perfect fit and I gravitated to them naturally. I really liked that to skate or do graffiti, I didn’t need another person or a team. If I had pursued for example snowboarding, my mother would have needed a car and money to bring me to a mountain, not to mention all the expensive gear. All I needed to skate and do graffiti was the streets. Even as an adult I can still have fun in the streets for free.

Jesse: At one point there was a cash reward in exchange for information of your identity, the mayor of San Francisco even wanted to prosecute you, has all of that now changed for you, since you have become a global ambassador for clean water?

BNE: I’m not sure. I was actually introduced to Gavin Newson (SF Mayor) after he issued that reward but the subject of BNE didn’t come up in our conversation. It’s a little ridiculous that he issued a reward for someone putting up stickers but whatever, I’m not worried about it, and I don’t even live in the U.S. 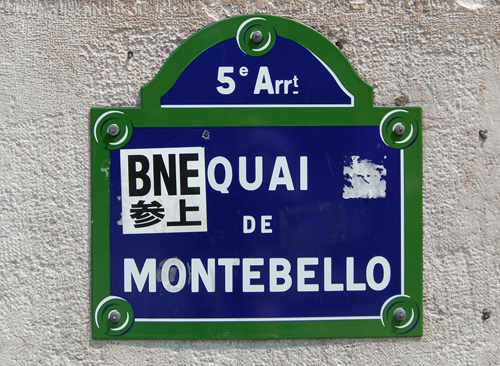 Jesse: You have Flickr galleries, YouTube pages, millions of people come across your stickers online and offline, you single-handedly created a brand out of three letters, what’s next for you as an artist and philanthropist?

BNE: This NPO is a huge amount of work and I am going to do everything I can to make it a success. Ultimately though, the people themselves will be the deciding factor in whether this works or not, I can only do so much. To be honest, I think that we as people are the real problem. Greed and indifference are a bigger problem than clean water, war or anything else for that matter. As far as art goes, I consider this NPO a work of art. I can only lay the groundwork though, it’s up to the people to recognize this project’s huge potential and help it grow into the greatest piece of art ever created.

Jesse: You have travelled the world, but is there one place that you haven’t been able to visit yet? What would that place be?

BNE: Yes, there are a few places I haven’t been. I’m not finished travelling yet.

Jesse: How involved are you with the distribution of water filters and educating people about the importance of clean water?

Jesse: Just saw the new BNE water t-shirt online a few days ago, do you plan on incorporating art/branding more into the fundraising efforts for your foundation in the future? What can we look forward to from BNE Water in 2012?

BNE: Basically right now we are raising money three ways. The first is the traditional way of accepting donations from our supporters. The second way is through the sales of art. We are trying to unite the global art community in our fight by asking artists to donate work that eventually gets sold in our online gallery. For this project to grow we ask every contributing artist to each recruit two more artists. The third way that we are raising funds and awareness is by what I call ‘Activism Through Commerce.’ We will eventually have a full line of BNE branded products that will be sold globally. 100% of profits from BNE products will fund our work. Most of the time when you buy a brand name product, whether it’s a drink or a handbag, your money goes to a rich person who already has more than enough. I would like for BNE to become a multinational brand that benefits a large number of poor people instead of just a few rich people. I think that being aware of where your money goes and actually thinking before you buy is a powerful revolutionary weapon. A little later this year, we are going to build out our website and give our supporters a platform to create profiles and start their own fundraising campaigns. We have a lot of plans but they will only come to life with the people’s support.

Disclaimer from the BNE Water Foundation: Interview answers have been forwarded to us anonymously from BNE. He does not operate our website or social media accounts. BNE Water Foundation is not responsible for any acts of illegal vandalism whatsoever.