MTV’s longevity and success, in an industry known for ever-changing tastes―ah, boybands!―and an audience that’s a moving target, can be credited to its willingness to adapt. Not one for forcing a square peg into a round hole, MTV’s ability to innovate and match their audiences’ interests across multiple platforms is impressive. And while some may mourn the days of when MTV was an all-music, all-the-time station, I know that this reporter both respects the creativity MTV employs to stay profitable and appreciates the diverse―albeit often ‘guilty pleasure’―programming. Today I’d like to introduce you to the woman is responsible for guiding MTV through the ever changing landscapes of TV, web, social and mobile: Kristin Frank.

Since taking the position of General Manager of Digital Media in 2009, Kristin has increased traffic to MTV’s sites at an astounding rate. Her commitment to cross-platform content creation has sent the number of MTV’s Facebook “Likes” soaring beyond the 100 million mark. Recently she helped pioneer two apps that have revolutionized the way MTV and VH1 viewers watch TV. Launched in the summer of 2011, WatchWith and CoStar connect viewers in real time to the stars and fans of their favorite shows during the debut of each episode. 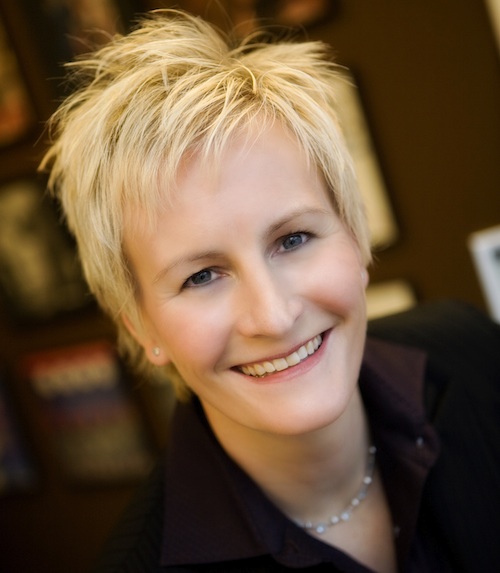 You can follow this busy mother of two young boys on Twitter @kristin_frank or check out her full biography on MTV.com. Now it’s time for Kristin to explain in her own words how she stays motivated to push the envelope and what it takes to be a successful woman in the media world.

LB: When the MTV and VH1 Digital was put under your control, it experienced a 200% year-over-year uptick in visitors to its online properties. What has been the strategy that has driven these results? What role have you played?

KF: Our overarching strategy has been to move away from thinking of ourselves as “digital” and instead to focus on creating, distributing, marketing and selling content. We’ve embraced the notion of storytelling without borders and are now harnessing the power of all of our screens to extend show narratives and characters, as well as our audience’s passions like music and pop culture. We’ve led the industry in pioneering and innovating around social media and as a result, we’ve seen viewer engagement soar to an all time high. Instead of spending millions on acquisitions, we’ve been able to grow our audience and ad revenue by forging strategic alliances. We’ve also worked closely with our ad partners to creatively implement them into our content in ways that have helped them grow their own brand equity and reach.

My role is to create and implement the vision and strategy for how MTV and VH1 maintain leadership in today’s hyper connected world ― while simultaneously contributing to and helping evolve our core television businesses.

I am fortunate to lead one of the best teams in the industry, who continually surprise me with their ability to innovate and lead in the space.

KF: Since MTV and VH1’s inceptions, we’ve been fully committed to providing our audiences with a voice across all our screens. Really early on, everyone, from the Viacom leadership down, saw the enormous potential social media platforms would have in helping us create two-way dialog with audiences. Unlike many of our competitors, we’ve avoided using social platforms to simply output marketing messages and instead, work to put great content on these platforms and to develop an authentic voice that resonates with our audiences. We invest in talented people and developed a flexible organizational structure that allows for simultaneous content creation and audience dialog. At MTV and VH1, content is now created, products are developed, news is broken, shows are premiered and tent-pole events are planned with social platforms in mind. This large ecosystem of television, web, social and mobile has contributed to our record levels of engagement and ratings.

LB: Working for MTV and VH1, there must be a few perks. What is the best part of your job?

KF: There are definitely daily benefits to working at MTV and VH1. You never know who you are going to meet in the elevators (Adele, Jay-Z, Tyler Posey and Big Ang are recent favorites), or what talented new artist is performing on the floor. Who else has a job where you get to provide fans with direct access to shows like Teen Wolf and Mob Wives as well as VH1 Divas, MTV VMAs, VH1 Storytellers and the iconic Unplugged?

Hands down, the best part of my job is leading a talented team as we pioneer the MTV and VH1 brands in the ever-changing digital space.

LB: If I told you 20 years ago that today you would be working on digital media for MTV and VH1, would you believe me?  Why or why not?

KF: Twenty years ago I distinctly remember geeking out in a grad school statistics class listening to REM’s Losing My Religion, compliments of my favorite professor who would play REM constantly during class (geek chic was cool back then too!). REM was one of my favorite bands in college and MTV brought them mainstream around that time. I would have believed you, given my love of music, math, REM and MTV/VH1 ― four passions that still remain strong today.

LB: Over your career, have you personally seen increases in the amount of women working in digital media and those who have reached leadership roles in the field?

KF: Absolutely ― at MTV and VH1, I am honored to work with an extremely talented group of senior executive women in leadership roles. In my team specifically, we have many types of roles led by strong women ― editors, designers, producers, business development and sales professionals.

Diversity beyond gender is also critically important to a business and contributes to the creativity and success of our brands.

LB: Do you have any career advice for someone thinking about entering the digital media field? Or working for a company like MTV? What are you looking for in a new hire?

KF: Both a creative and a business mind; with the lines between new and traditional media blurring at a rapid pace, you really need to have a strong understanding of media in general. The business is no longer nascent. To succeed, you must have superb vision and an innovative spirit, as well as strong business acumen to evolve these businesses into the next generation.

I am specifically looking for well rounded people with minds for business and creative spirits who are capable of developing their own POV but who can still contribute generously to support the ideas of others. The ability to think creatively while appreciating that MTV\VH1 are vibrant, growing and diverse businesses is critical.

LB: How has MTV transformed from the days when you used to watch it as a consumer to now? Do you recognize the company or is it completely different?

KF: MTV and VH1 have continually evolved and re-shaped themselves to fit the needs and passion points of their audiences. This progress and change in tandem with our audience is key to our long-term success and relevancy.

LB: Have you ever observed or encountered the glass ceiling? If so, in what ways did you overcome this?

KF: While the glass ceiling still exists in other organizations and business sectors, the bigger problem facing women today are life dilemmas ― can I be a mother and an executive? Women face excruciatingly hard choices when it comes to juggling work and home life. Time and time again, I’ve seen women who should be C-level executives, self-impose breaks on their career and stay firmly put in middle management or leave, because they felt they couldn’t lead a company and be the parent they want to be at the same time. Most women I know struggle with this each and every day.

As a mother of two young boys, now 6 and 4, I have had days where I am back and forth to school and work no less than three times to each location. This intense juggling between family and work can be exhausting and trying and leads to 1 am mornings to finish everything. I think the biggest issue women face is the ‘internal’ environment ― the way women speak to themselves. I have learned to turn off those negative notions in my head that say you can’t do it.  I have learned to work hard, to work smart and to laugh at myself even harder when things are close to, but not totally perfect. My advice to women is to seek advice and support from other female executives in their company and if you are raising a child with a partner, have an open and ongoing dialog with them about equally sharing the responsibility so both careers can be prioritized. In the end, you can have what you want. You must be able to determine what that means for you.

LB: You’ve clearly made a lot of the right moves at the right time. But tell me about some of the missteps. What are some mistakes have you made in your career? What were some of the key lessons learned?

KF: In digital, we are tasked to be the next generation of thinkers, and our most common missteps are bringing something to market that the consumers are not ready for yet. For example, when I was COO of Logo, we launched a virtual DJ dance party experience in 2007, that floundered and eventually sunset. Fast forward six years and experiences like TurntableFM have launched and are doing quite well. The bitter irony of perfect timing.

LB: What drives you? What motivates you to get out of bed, stay late and / or work on the weekends?

KF: I’ve always had a passion for numbers and solving puzzles. I’m fortunate in this role to take that and extend it into developing and launching new products, experiences, and getting the numbers to work.

I’m lucky in that my role also allows for me to embrace my creative and innovative sides, including encouraging and coaching my team to push the boundaries of content creation and storytelling. This constant state of innovation and working alongside the most amazing team in the industry are my key motivators.

LB: What are three pieces of advice you would give to a young woman interested in leading a large media company someday?

KF: First, I would recommend that women strive to develop a broad base of work experience in order to build a strong tool kit of skills. Second, and this is more a mental exercise, but believe you deserve your success and never stop negotiating for yourself. And third, hire well ― create a flexible organizational chart and never stop advocating for your employees.

Disclosure: Leslie’s company, JESS3, has worked with MTV in the past.