Over the last six months, I’ve talked to dozens of people — men and women alike — about which “power seats” need more women the most. I’ve even published a number of these conversations here on Forbes (and plan to continue to do so this year). Time and time again, one of the top three areas — if not the #1 area — where there is a dearth of women in “power seat” roles has been in the area of venture capital. This goes for both women in venture capital firms (where there is money, there is power) and in leadership roles in those firms (VC leaders are the arbiters of how funds are allocated), as well as women seeking funding from these firms.

At the same time, I can point to a half dozen examples that give us hope that have surfaced in the last few weeks (even days): from Bessemer’s announcement promoting Sarah Tavel to VP and Tara Hunt closing an oversubscribed seed round for Buyosphere, to the launch of the Women Innovate Mobile incubator, to female-led DailyWorth raising $2M in funding, which was led by an angel team that is 50 percent female (Joanne Wilson and Howard Lindzon).

And while this anecdotal evidence is interesting, what is even more powerful is hard data. Enter Alisha Ramos. A senior at Harvard University, Alisha is working on a thesis asking: Where Are The Ladies? I’ve asked her to share the background on the project, as well as what she hopes to find once it is completed in March of this year. In what follows, Alisha does just that.

A flurry of articles have been written on the “women and startups” problem. The same issues are brought up again and again, but one issue that hasn’t been given much attention and scrutiny is the significance of the fact that there are practically no female VC’s.

The fact that females are underrepresented in finance is a given, but the venture capital industry specifically is an egregious perpetrator of maintaining a well-balanced gender ratio. Let me provide you with some statistics. Only 2 females were listed on the 2011 Midas List, an annual list of the top tech investors. A quick-and-dirty analysis of the gender ratios of the most active VC firms of 2011 as well as some of the most visible VC firms out there today reveals that almost half of the firms have no female investment professionals within the firm, and the average percentage of females in these firms falls at 8%. [See here for my data.] On top of this is the fact that the most visible investors out there — the Fred Wilsons of the world — are male.

The lack of females in venture capital becomes a greater problem when considering the ways VC’s seek new deals: through their own social networks including other VC’s and portfolio company founders. A few months ago, Lindsay Meyer wrote an article here on Forbes titled “Are Networking Groups for Young VC’s Subtly Shutting Women Out?” Meyer writes that VC-sponsored activities such as skeet shooting or poker nights “unintentionally cater to men” and therefore give men the opportunity to forge important networks that are later utilized for referrals when seeking new deals. 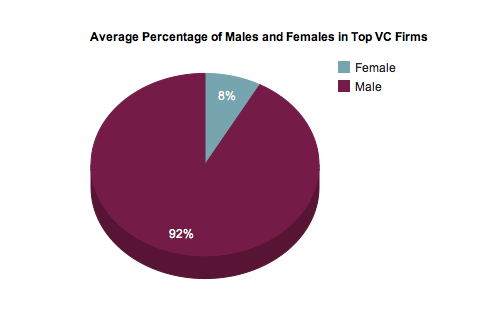 Some research has also been done on the implications of the skewed gender ratio. The Kauffman Foundation published a paper on the role of women in the venture capital industry. It concludes that more female VC’s would lead to more investments in female-led startups. While the research is lacking in evidence of female VC’s giving preferential treatment to female-led companies, it does make an interesting aside to the networking impact the presence of a female in venture capital firm could make on providing access to female entrepreneurs.

Many VC’s have stated that “there aren’t enough women entrepreneurs out there” as the reason for the lack of female-led ventures that receive VC funding (about 4 to 9% of all VC funding goes to females). But we already know that women are starting new companies at a rate 1.5 times higher than the national average. And yes, while many of those companies may not be the high-growth/high-potential opportunities VC’s look for, the problem may still exist that females have a more difficult time gaining access to VC’s than males, and that this might have to do with the fact there are virtually no women in venture capital. Oftentimes, female founders seek angel investor money before seeking VC dollars. This may be simply because gaining access to angels is easier for both genders, but it could also do with the fact that there are more female angel investors than there are female VC’s and research suggests that female entrepreneurs tend to “gravitate to female angels.”

With such statistics and anecdotes in mind, I decided to write my senior thesis and conduct my own original research on the topic of founders’ access to VC’s, with an emphasis on how VC’s source deals, how startup founders (of both genders) seek to connect with VC’s, and what role gender might play in all this, if any.

I don’t want my thesis to point the finger of blame at anyone. In fact, that’s part of the reason why I’m writing it. Many of the articles that have been written so far blame either the men (they’re sexist! they flirt!) or the women (not aggressive enough! risk averse!), but I believe there are more collective, structural reasons behind the problem.

In order to collect data, I have been interviewing both male and female startup founders and VC’s to hear about their experience. If you’re interested in being interviewed or taking my survey, simply head over to wherearetheladies.com. My findings will be published in March.

Educational Background: Senior at Harvard University, pursuing a degree in Sociology and History