After being on the ground in Iowa to watch Santorum’s last-minute surge and on the ground in New Hampshire to watch Romney claim a victory, it was a welcome reprieve to run the Google Politics and Elections War Room for South Carolina from Google’s DC office. 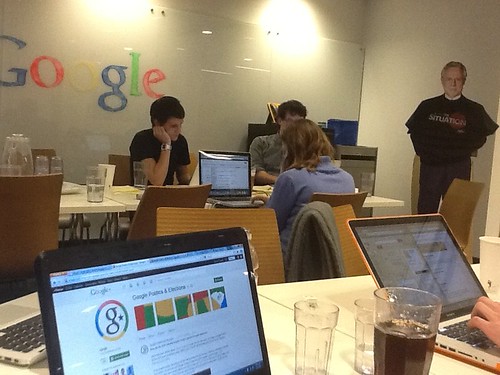 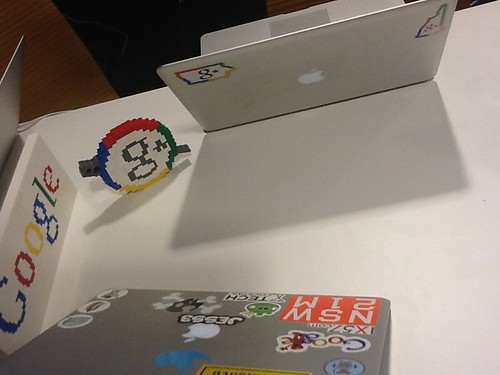 The biggest news coming out of South Carolina was Newt Gingrich’s surprise win. Just think, a week ago Mitt Romney was the inevitable nominee. In that time it was not only revealed that Romney had in fact lost the Iowa Caucus by only a few votes, but Gingrich rode a post-debate surge and snatched the victory right from under the Massachusetts Governor’s feet.

To understand the story of Newtmentum, look no further than Google’s search data (which the JESS3 team has been helping visualize for the 2012 Elections). As you can see, searches for Gingrich were almost non-existent before the Monday Fox debate, in which Gingrich received a rare standing ovation for his answer on race. By the time Gingrich lambasted CNN’s John King in the Thursday CNN debate, Gingrich had already far surpassed his rivals in South Carolina searches. 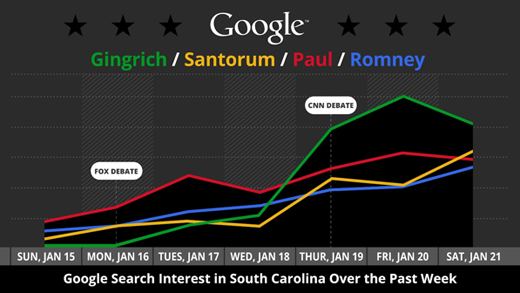 Of course not all Google surges are positive; nothing explains this better than the search terms most associated with Gingrich’s name. In the words of Chris Cillizza of Washington Post: “Still the most amazing thing I have seen today: South Carolinians’ Newt Google searches this week” (which he details in his write up here: “How Newt Gingrich’s past marriages may be helping him in South Carolina”). 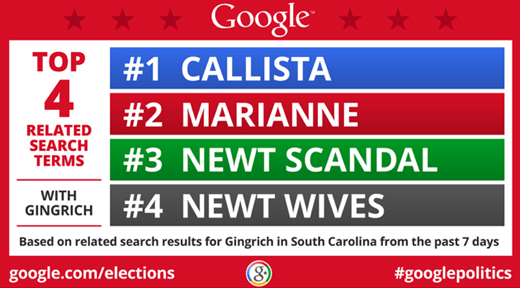 Though Gingrich benefited most from this week’s debates, Santorum also enjoyed a nice bump in search interest.

In three of the last four polls of South Carolina voters, Rick Santorum placed fourth. However, Google’s search data had Santorum narrowly as the second most searched-for candidate. 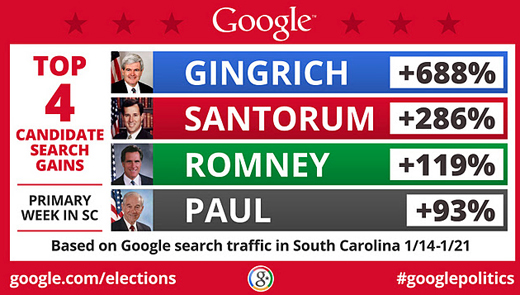 Over the course of the day, the JESS3 team worked hand-in-hand with the Google Politics and Elections team to provide search data and tools to journalists reporting on the South Carolina primary. As a result, many stories filed today leveraged Google’s search data to support their narratives. Google’s data helped power stories by The Atlantic, ABC, USA Today, Politco (twice), Washington Post, Fox News, TPM, The Daily Beast and The Telegraph.