As an entrepreneur, you spend a lot of your time looking forward and asking: where are we headed? Do we have enough cash flow and resources to keep moving? What’s the next big thing? Where do we want to be in 18 months?

Every so often, you also get to look back and ask: where have we been? what mistakes have we made and how do we learn and get better from them? what brought about key shifts for us and how can we summon the strength to make even more change happen?

Preparing for Silicon Valley Bank’s Accelerator CEO Summit last week provided me with the opportunity to indulge in this very kind of reflective pause. Along with an Olympian (Linda Jackson), a sommelier (Raymond Nasr), the Deputy CTO of the U.S. (Chris Vein) and dozens of entrepreneurs and industry leaders, I shared a handful of defining moments that have changed the course of our company — and in the process, changed me.

While I normally focus on talking to other women about their experiences, today I wanted to share a few of my own, in hopes of continuing to shape and evolve the discourse around women getting more seats.

From the moment of JESS3’s inception, we made an unrelenting dedication to excellence. This has meant we never ship at 80% and would rather lose money on a project than have it fall short of the highest possible expectations. Our process and precision are as important to our output of excellence as the input from our incredibly talented team members.

Coupled with our dedication to excellence is our commitment to continuous experimentation. The labs mentality permeates our company; coming up with new approaches and collaborating without budget / time / client pressures are what have brought about some of our most monumental outputs: The State of the Internet, The Conversation Prism, The State of Wikipedia, The Geosocial Universe, the Ex-Blocker Plugin, and I Voted. It has also provided us with a platform to do pro bono work and support causes we believe in: Amnesty International, Cause Shift, the BP Oil Plugin, Changing the Ratio on Wikipedia and getting women More Seats. We fund these projects on our own and strongly encourage making this a priority — whether you are an established company, or just starting out.

There are hundreds, if not thousands, of creative agencies in the world. Producing excellent work and having a penchant for labs certainly helps break through the clutter, but even then, you are still up against shops that are bigger, more established and better resourced than you are.

Enter: our choice to focus on data visualization.

Inspired by a combination of (a) Edward Tufte seminars, (b) Jesse’s proven track record as a UX and social designer, (c) getting a read on the market through wins with Brian Solis (Conversation Prism v1), APTA (Go Green, Go Public) and C-SPAN (Convention and Debate Hubs), (d) more data being more accessible thanks to social and open APIs and (e) the exponential growth of data online and in our lives… it all came together… and we chose to focus our efforts on information design, visual storytelling and the craft of data visualization.

Defining Moment #3: Leaving My Day Job (or Facing Down the “Ginger Rogers Conundrum”).

Since graduating college in 2004, I’ve been a legal assistant’s assistant at two firms (Gleaves Swearingen and Arent Fox), a consultant at Dezenhall Resources, a senior producer and director of new media at The McLaughlin Group and a project manager, communications manager and director of engagement at New Media Strategies. Starting at Dezenhall and while at TMG and NMS, I was also helping JESS3 grow.

So while I was doing excellent work from 9 to 5, advancing rapidly in responsibility, role and salary, I was coming home every night (and working through the weekends) and rallying to then run JESS3’s payroll, communications, proposal writing, finances, account and project management, HR and legal. I did this by myself — with off and on help from a small handful of people, chief among them our now VP of Production and Operations, Becca Colbaugh — from October 2006 to January 2010.

Enter: exhaustion, burn out, conflicts, stress, 100+ hour work weeks, learning and living more in a single day than most experience in a month… for almost four years. I affectionately call this the “Ginger Rogers Conundrum” — that is, having to do all the things others were doing only while trying to do many other things (i.e., backwards and in heels to Fred Astaire’s moves). 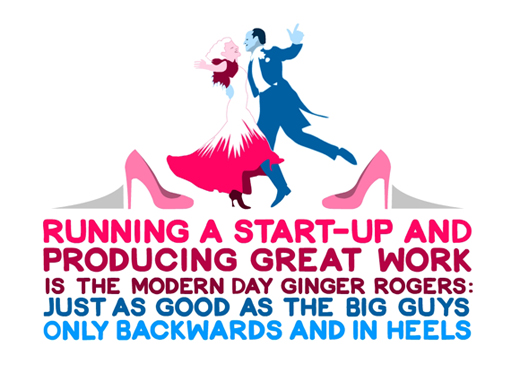 < In the fall of 2009, I made some important decisions, tested them and went with with my heart by New Year’s day 2010. I doubled down on my longtime relationship with Jesse and JESS3 and have never been more challenged or happier in my life as a result. I can say that with 100% metaphysical certitude, to borrow a phrase from my old boss Dr. John McLaughlin. Recommendation / learning: try to leave your day job sooner if you can to pursue your passion, but also realize that working at other places in a variety of roles will also fill out your skill set to make a real go at doing it on your own. Defining Moment #4: Hiring a Seasoned Dev Team and More Women.

Part of starting out is being scrappy in every possible way: you charge less, you are understaffed, you hire less experienced team members, you yourself are less experienced and you make up for it with heart, hustle and fortitude.

The main things we truly had an advantage in were (a) the level of excellence in our design and (b) our social + data-driven creativity. We also charged waaaaaay less than anyone else in the market. The rest we failed at… miserably.

We didn’t have enough bodies to do work; we also didn’t have the right bodies. Part of the issue was that because we charged less, we had less to spend on talent that wasn’t critical to design (the inverse issue of most companies, might I add). Which naturally begets the issue of when you hire “A players” in the design space, you leave little to spend on positions that were seen as overhead: project and account management. We also faced the same challenge that every company in our space is challenged by: the talent war for engineers.

So what did we do? In every case but design, we resorted to hiring hungry and sharp folks straight out of school to help fill the non-design roles, buying “A player” time here and there where we could. But as stakes got bigger in terms of dollars, client expectations and pressure, this strategy collapsed on itself. Fortunately, the momentum from the creative work and the income from it made up for this failing and, eventually, proved to be the things that attracted more seasoned team members: come work with a well-resourced company that makes fire-hot work.

The other thing that is important to note about our shift in hiring practices has been the positive outcome from hiring more women. Let me explain a bit more.

A longtime advocate of women getting more power seats at the table (and even now blogging about it at Forbes under ForbesWoman and “More Seats”), I actually didn’t purposely try to fill a female quota or turn down qualified male applicants (affirmative action is not my style). But I will say this: in hiring more women, I’ve watched our collective ability to multitask and take on more be helped because of what women have brought to the table.

I will also share this for all the male-lead, male-founded companies: because we have such a strong, focused and fierce founder in Jesse, bringing in another Alpha male who wants to continue to be a big A “Alpha” (despite trying to be a little a “alpha,” just can’t seem to get over Jesse as big A “Alpha”) has been a recipe for discord (at best) and disaster (at worst). But put a woman along said big A “Alpha” male, even the most driven, intense and fierce (as I am, and many other ladies on the JESS3 team are), and the yin and yang just works.

Recommendation / learning: don’t settle for less experience when hiring and hire more women to bring different skills and balance to your team.

An important note to end on and one that I blogged about back in August (“5 Things I am Doing to Live a Better Life”), is making a commitment to sleep more, eat healthier and exercise regularly. Early on with my double life and even as recent as last year and into winter and spring 2011, I hadn’t made this commitment because of three things: (1) the feeling that there wasn’t enough time for taking care of myself and that my clients, my team, my bosses and my partner all came first, (2) the law of inertia and (3) I got addicted to what I was doing.

As I finish this post and get ready to head to the gym, I can say that no matter how busy I am, there is always time to get exercise. It is also thanks to a shored up team that I can take some time out for myself. And I am now addicted to five small meals, more salads and Greek yogurt than should be legal and the gym. And it is awesome. So please, if you are a founder and you are reading this: take care of you for you and so that your team sees that it is a priority for them, too. To paraphrase Gloria Steinem from Fortune’s Most Powerful Women Summit earlier this month: ‘We do what we see, not what we are told.”

I am interested to know from others: What has defined you and your company? I am also interested to go through this exercise in another year or five.