There’s just something about the air in Los Angeles. I mean, besides the smog. When I flew out there this summer to meet with the team assembled by JESS3’s Creative Director Mark Kulakoff, I was so impressed with the cast of characters. We were all prepared for the long day of work we knew was ahead of us. And while it could have been a nightmare, the day was smooth sailing. Everyone was incredibly flexible — our set designer even helped behind the puppet desk at one point. There  was surprisingly little ego across the board; instead, I was taken aback by a team-oriented attitude dedicated to producing five minutes of magic.

That five minutes of magic was the video above: TV Ratings 101, made for ESPN to use in training its new advertising representatives. Why yes, those are puppets.

JESS3 had never considered employing puppets before, but we’re so glad we did! For TV Ratings 101, the move to feature Chip and Clay was a last-minute decision by Mark. Everyone had agreed on papercut, but it dawned on our team that puppets would be the perfect addition we were all looking for. In thinking about really recreating a real 1970s-style sportscast — and with the client suggesting Sesame Street as an inspiration — I mean, why not use puppets?!

Surprisingly enough, introducing puppets actually simplified the production process. After the shoot, which did take a couple of takes per scene to get the voice over right, the editing proved really straightforward. Whereas, producing a few seconds of animation can take hours for complex scenes.

Another fun fact about the puppets is that the stars of this production — Chip, Clay and our southern belle Nielsen correspondent — will live forever as “ESPN employees” in a special place of honor at the new ESPN offices. Keep an eye out for them in the background of those hilarious ESPN commercials featuring their behind-the-scenes run-ins between anchors and athletes.As fun as Chip, Clay and Belle were to work with, we still found ways to make room for our initial inspiration: papercut. The first thing that anyone should know about papercut is the level of detail and precision that it demands. I have nothing but the ultimate respect for this craft.

For this video, we really wanted to expand on JESS3’s expertise in animating paper. We sought a balance between the 2-D and 3-D approaches that we have employed elsewhere, adding bends, folds, extrusions and bevels to create a depth that 2-D paper pieces lack. For example, when crafting the faces, instead of being glued on flat, it was cut flat but glued down with a bend to give the paper volume and reflect light uniquely from different angles. 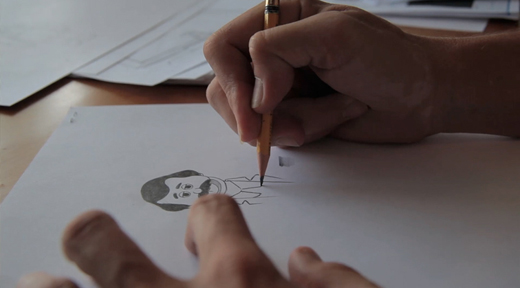 Before creating the characters, however, our storyboard artists first illustrated each scene. The papercut team hunted down the right paper to match the style of our digital storyboards, then redrew and cut out each piece. Some folks had over 20 parts to cut.

It turns out that one of the most difficult and demanding elements of paper art is the gluing. If the glue dries wrong, well, brace yourself to start over from scratch. If you placed the glue on the wrong part, start over. If the eyes are glued onto a character in a way that makes him or her look funny, do not pass go, do not collect $200. Start over. 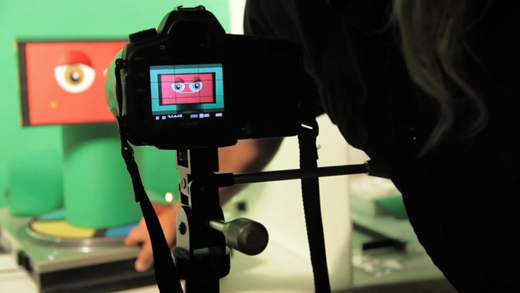 Once all of the pieces are perfectly constructed, enter stage right: the photographer. The photography required a lot of foresight into the scenes that we needed to animate. We also had to make certain that for each piece the light was exactly the same. The shoots resulted in literally thousands of photographs, which we imported to a computer in preparation for the animation. On the computer, each image was cut out by vector paths and cleaned up here and there.

In the end, prepping each digitized image took as long as the papercutting. Then animating them was another beast of a project. And of course animating each character requires animating his or her shadow. The whole process really illustrated how the steps necessary to animating paper build on each other, becoming extraordinarily complex very quickly. 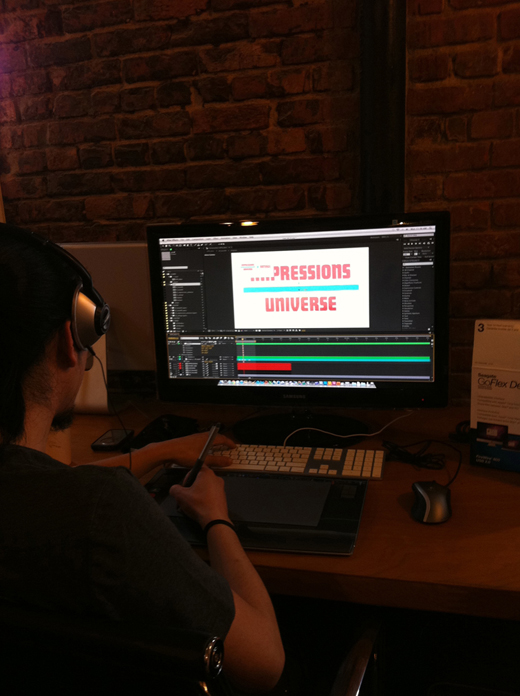 That’s the long version of how we pulled this off. The short version? All it takes is foam core, puppets, paper and a little imagination to transform JESS3 LA into a stage and studio for a full-blown puppet and papercraft shoot. That’s exactly what happened last month, and the result could arguably be JESS3’s best work yet: TV Ratings 101. See the full behind the scenes below: