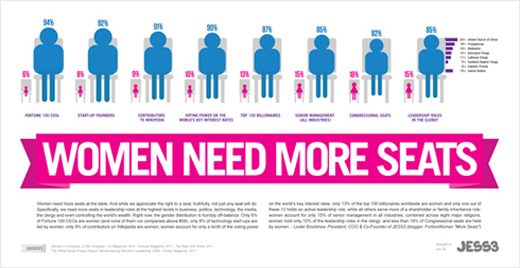 I agree with Facebook’s COO Sheryl Sandberg: Women need more seats at the table. And while I appreciate the right to a seat, truthfully, not just any seat will do. Specifically, we need more seats in leadership roles at the highest levels of business, politics, technology, the media, the clergy and even controlling the world’s wealth. Right now, the gender distribution is horribly off-balance:

* Only 6 percent of Fortune 100 CEOs are women (and none of them run companies above #39)
* Only 8 percent of technology start-ups are led by women
* Only 9 percent of contributors on Wikipedia are women
* Women account for only a tenth of the voting power on the world’s key interest rates
* Only 13 percent of the top 100 billionaires worldwide are women and only one out of these thirteen holds an active leadership role, while others serve more of a shareholder and family inheritance role
* Only 15 percent of senior management in all industries are women
* Combined across eight major religions, women hold only 15 percent of the leadership roles in the clergy
* Less than 18 percent of Congressional seats are held by women

If this was 100 or even 50 years ago, I might at least understand these statistics. I could argue that women’s access to higher levels of education wasn’t the best, that men weren’t taking a very egalitarian approach to the household and cultural norms placed women in paraprofessional roles (think: secretary, copywriter) and were not thought of as managers, directors and leaders.

But today is 2011 and there is little excuse for there to be such paltry figures across the board. So what’s going on here? The common explanations I’ve heard over the years include:

1) Women don’t negotiate. As Kathryn Minshew notes at the Daily Muse: “Nearly 60% of men negotiate their first salary out of college—while only 7% of women do.” Compound this gap over time and you can see that a woman’s salary and role can easily remain below that of their more aggressive male counterparts. Books like “Women Don’t Ask” and “Nice Girls Don’t Get the Corner Office” document this in depth.

2) Women take time out of their career for their family. This often means—in the words of Sheryl Sandberg—they “leave before they leave” and start scaling back their involvement even before having their baby. Ramping back up is also a challenge.

3) Women don’t have as many female role models and female mentors. When you think of the innovators and entrepreneurs of our generation (and especially when you go back a few generations), you still see a male-dominated landscape. Kara Swisher underscores this as she calls out to top start-up darlings from her All Things D column: “The Men and No Women of Web 2.0 Boards (BoomTown’s Talking to You: Twitter, Facebook, Zynga, Groupon, Foursquare).” Mentors and role models enable women to see what is possible through their eyes, their gender, and their experiences. Women who have “made it” also need to be committed to paying it forward.

While these explanations are certainly not comprehensive, they do start to scratch the surface of what we are up against. In an effort to address, overcome and annihilate these gaps, this blog will work to inspire through interviews with women who have negotiated hard, founded their own companies, taken time to be a mom, been elected, lead a congregation, earned a prominent seat at the table and everything in between. As a female founder of a technology company who focused a lot on gender, power and economics in my studies at the University of Chicago, I will also be throwing in some of my insights and experiences when warranted (and even when they’re not).

* Kara Swisher promises to tackle the “Women in Tech Conundrum” this fall with Glamour Magazine
* Huffington Post’s new channel “Women in Tech” brings a consistent, high-profile spotlight to the women making it happen
* The #changetheratio drumbeat started by Rachel Sklar
* The Girl Crush zine
* Women at least dominate social media usage; next, social media company leadership
* There are more female world leaders than one would think
* This year’s Google Science Fair was dominated by girl power, as the three top winners were all women
* The launch of the Daily Muse
* Organizations like The Hot Mommas Project, DC Web Women, BlogHer, and Women Who Tech work to support, engage, educate and advocate for and by girls and women
* Women like Jolie O’Dell don’t just write the talk, they code it (and then write about if for all of use); I also love when she shares well formed opinions and statistics about women and the hard sciences
* Randi Zuckerberg just announced that she is hanging her own shingle, founding the media company RtoZ
* Women like Arianna Huffington selling big to AOL, Sheryl Sandberg C-leveling at Facebook, Chloe Sladden leading media partnerships for Twitter and Marissa Mayer engineering at Google inspire us and show us how it is done

Know a woman who should share her “More Seats” story? Maybe she’s you. Have a “More Seats” topic you’d like me to go deep on? Email me at lesliebradshaw [at] jess3 [dot] com