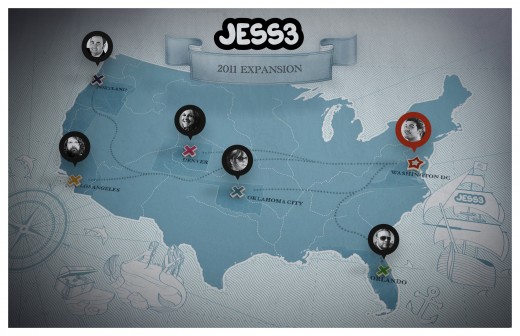 What’s better than opening our doors in our nation’s capital earlier this year? How about opening five additional offices across this great, big country?

While we continue to operate entirely in the cloud across multiple time zones and countries, we believe strongly in having a physical space to collaborate, curate art and noms that reflect our personality, tap into creative epicenters and to better serve our clients. From Florida to Oregon, Denver and Oklahoma to LA, I’m thrilled to announce that we’re expanding our footprint to do just that.

This summer, we’ve not only hired some top talent, but we are also making sure to put roofs over their heads and team members by their sides in their respective cities. New office locations and team leads include:

JESS3 PDX (Portland, Ore.)
The Portland office will be led by JESS3’s Director of Strategy, Brad Cohen. In addition to Cohen, we have digital producers in the region and are actively recruiting for open strategy, creative and development positions.

JESS3 OKC (Oklahoma City, Okla.)
Having just spent six weeks there, with multiple team trainings and full-on bootcamp, I can honestly say that the Midwest is the hard-working production backbone of our company. My longtime partner in crime Becca Colbaugh leads the way as our VP of Production and is joined by Senior Project Manager Jenny Redden and Executive Assistant Lydia Wallbaum.

“Managing from the heartland offers me a centered perspective,” Colbaugh said. “Oklahomans get down to business, it’s nothing but hard work and focus around here. Heading into my fifth year of service at JESS3, it’s a major milestone for me to help the company open doors.”

JESS3 DEN (Denver, Colo.)
Our presence in Denver will be headed up by newly minted Vice President of Client Strategy, Lauren Cook. In addition to quick access to west coast clients and offices, we are eager to tap into the innovation, agency prowess and talent the Denver and Boulder areas offer (think: TechStars and CP+B).

JESS3 LA (Los Angeles, Calif.)
As the center of the universe when it comes to motion pictures, Los Angeles was the only place to cultivate our motion studio, spearheaded by Creative Director Mark Kulakoff. In addition to producing a number of videos for Google including a stop motion animation piece, we have launched some of the Interweb’s most popular videos, including the State of the Internet and the State of Wikipedia. Spoiler alert: Multiple productions are underway for launch in early fall 2011.

JESS3 FL (Orlando, Fla.)
Orlando will serve as our new engineering hub, with four key additions to the team: Trey Long will fill the newly created Director of Engineering role and George Vilches, James Diss and Travis Terry will bring their decades of experience as Senior Software Engineers. JESS3’s Orlando engineering team hails from AOL’s Blogsmith team and will be leading product strategy and development for the DC-based agency.

As a sixth generation Oregon Trail pioneer, this kind of expansion and exploration is in my nature. And, speaking of expansions and explorations: As a huge fan of numerology and as I am about to embark on my sixth year at JESS3, I feel it is rather fitting to open six offices and shout out: Westward, ho!