The cloud computing industry event of the year, Dreamforce ’11 (#DF11), kicks-off next month. To celebrate, we partnered once again with Eloqua to create an infographic that gives a visual history of the event.

When we started thinking about how we wanted to create the infographic, we kept in the back of our minds that the most important thing was to let the data drive the visual. We received a rich set of data provided by Dreamforce organizers and salesforce.com, including the list of speakers throughout the history of the event, the number of attendees and exhibitors, the production locations, and which bands have performed.

Using key visual elements reflective of Dreamforce and Salesforce — like clouds and buildings — we built an infographic that tells the story of the data.

There were a few different concepts focused around our initial inspiration. First we presented the data in more of a sectional layout. Then we tried doing more of a flowchart concept. Finally we created a scene using the data itself.

Following three rounds of exploration into the different conceptual ideas, the scene idea was working the best —  fitting both the theme and mood of the brand and story. The scene concept was then tweaked and refined structurally, with the style reflecting and reinforcing the visual language of Dreamforce and Salesforce.

We’re really proud of how everything in the infographic fits together in the final product. Each element in the foreground builds up the scene while also contributing something statistically. All layers come together to tell the story of the data and the event. 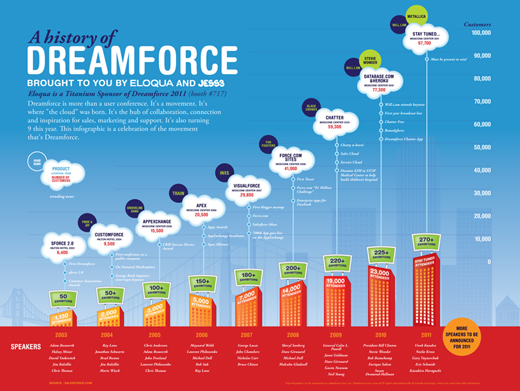 If you’re lucky enough to be attending Dreamforce ’11, make sure to check out the Metallica show. Yes — Metallica. Also be sure to stop by Eloqua’s booth (#717), where they’re likely to be giving away free posters of the infographic!

Disclosure: Salesforce is a client of JESS3.