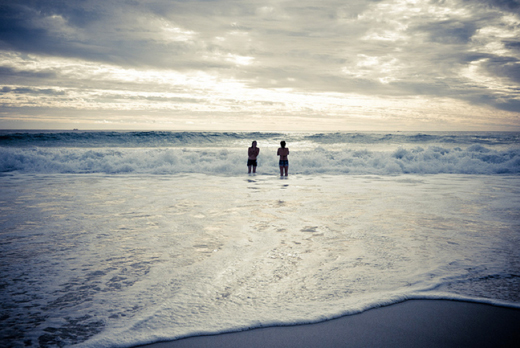 Everyone loves a vacation, but it’s usually over in the blink of an eye. Well, Ine Dehandschutter and Catherine Van Holder found a way to make it last a whole year — they took their work with them! The pair visited over ten countries on their work-and-play journey around the globe and they shared the successes (and failures) of their lifestyledesign method through slideshare!
JESS3 caught up with the pair to learn more of the ins and outs of their lifestyle design motto.
Why was this method better than the tourist route?
We both love traveling and have been doing it for a while. But travel is fast. You end up on the tourist track a lot — I mean, everyone has Lonely Planet.
Slow travel is nicer. You get to know a country differently, you get to know people who become friends. You get to know a city and its hidden gems that tourists don’t know. Plus it’s cheaper and more ecological.
But it takes longer. You need a way to pay for it — taking our jobs along was a solution to that. In fact, you could almost say that the idea started there; we wanted to design our lives with the things we like.
In the future, how would you choose your destinations?
We definitely would take language more into account. We also discovered that we love middle-sized cultural cities near the sea (or larger cities with a small center).
And we already have a short list of future destinations: Melbourne (though expensive), San Francisco, Valencia, Berlin, and Copenhagen (but that’s also a tad bit expensive). And of course we wouldn’t skip places like Thailand or Bali 🙂
What were some of the little things or daily joys that made it worth the effort?
We met incredible people all around. Some of them are hopping over to Belgium (where we live now,) and we’ll visit the others again.
What was the biggest positive surprise?
Again, all of the people we met; we did not expect to meet like-minded people so easily. When we arrived at our first stop in Cape Town, we met several brilliant people after only a week — we hung out with them most of our time there.
Today, we still consider them friends, even though we live far away from each other. The same thing happened in most locations. 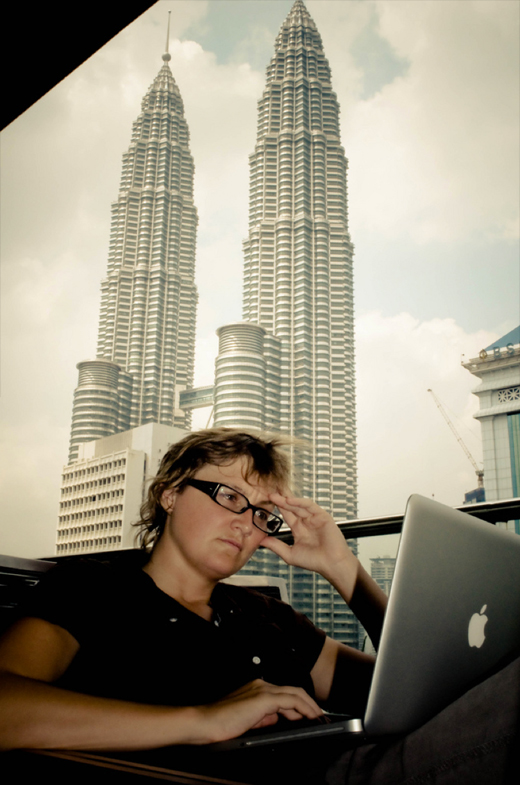 What was your biggest misconception about the trip?
We worked a lot; we were afraid of running our of money. However, in the end, we ended up with more money than we started with. So, next time, we’d try to be more chill about money.
To help prepare for your trip, you said you read The 4 Hour Work Week. What was your biggest takeaway from the book?
That you have to take it with a grain of salt and not just copy-cat like we saw many people do online 🙂 No really, the biggest take-away was probably to figure out the worst that can happen and prepare for that. Often, the worst isn’t really that bad.
For example: the worst that could happen to us might’ve been that we wouldn’t have enough work and we would run out of money. Our solution? Go back home. It might have felt like a failure, but at least we would have tried.
How did you budget your funds? Did you always allot a certain amount for housing, food, and fun?
While we earned most of our money through clients, in an ideal world, it would be possible to combine that with some form of passive income, as Tim Ferriss explains in his book. With that in mind, Catherine launched www.butikk.nu. But since the project is still pretty new, the income generated is not all “passive” at this point.
Before we left we set up an ‘approximate’ amount that we needed each month. We went over this budget everywhere — especially in Argentina with our last trip to Patagonia — but that didn’t matter because we earned more than anticipated. (But, we worked more too).
What do you mean by “Stop underperforming: Win Time” (Slide 27)?
We all procrastinate hours away on answering emails, going to meetings, Facebook, Twitter…it really helps to close all of that stuff, and just start working, and stay focused. Suddenly, there are quite a few hours in a day.
Our minds are jumping way too often to other stuff. It distracts you from your work. For me, Zen to Done helped me get more focused. That and the no ‘always on’ internet connection in South Africa.
You advise, “don’t underestimated the practical stuff (Slide 40).” What details caught you off guard?
Before we left, it was insurance, administration, and paperwork — it took ages. We would advise people to do these things early: the bank, the insurance company, the post office for rerouting your snail mail. You will always need to go twice. At least.
On the road, figure out the locations of the post office and supermarket. Every new city meant finding new affordable supermarkets, housing, cafes, and nice restaurants. This takes time.
On the other hand, we now know all of the best spots in Cape Town and Chiang Mai!  If you could return to anyplace you visited, big or small, where would it be?
Cape Town. No doubt.
You said Argentina ended up being too spread out and expensive (Slide 41). How would you avoid this problem in the future?
Expensive is not bad, you know. The longer you travel, the more you want to spend money for decent stuff. After all, it is your ‘home’ and you want to live comfortably. If you earn money, it is not that bad to spend it on good moments.
We never stayed in hostels. And when comparing our spending with a backpacker, we often had the same amount — they just spent more on food and expenses while saving on sleeping. We preferred higher sleeping costs, and finding local, cheaper places to eat.
And, actually the prices were not our problem; it was ‘offering too little for too much money.’ We found that we got less for our money in Argentina when we compared it to other locations.
On the other hand, we have to admit, we saw the most beautiful sights in Argentina: Iguazu falls, Patagonia… we never saw such beauty! And again, we met some wonderful people there.
Would you suggest taking this trip with a partner?
Yes, if you have one. 🙂 I, Ine, have been traveling a lot on my own, and the fact that you can share you trips with someone is unforgettable. As in ‘hey, do you remember that time, there?’ There is this shared thought that always will be there between two people. When seeing a picture, you both know what was outside the frame, you know the circumstances, the feeling, the sound…
It is also very convenient to have a partner in difficult moments. When you’re stopped at the border, it is much for fun and relaxed with two. Or when you have a bad day, the other one can cheer you up. You have to be strong though — 24 hours a day together is a lot. You need moments alone and some space.
In Thailand we lived in a hotel room for a while (grand luxury outside: pool, sea-side, space) but inside there was only one room, compared to our Belgian home with 3 floors. At one moment we rented an extra room just to have some space. The people in the hotel didn’t understand it at all. It was the most logical solution though. We still laugh about it. 🙂 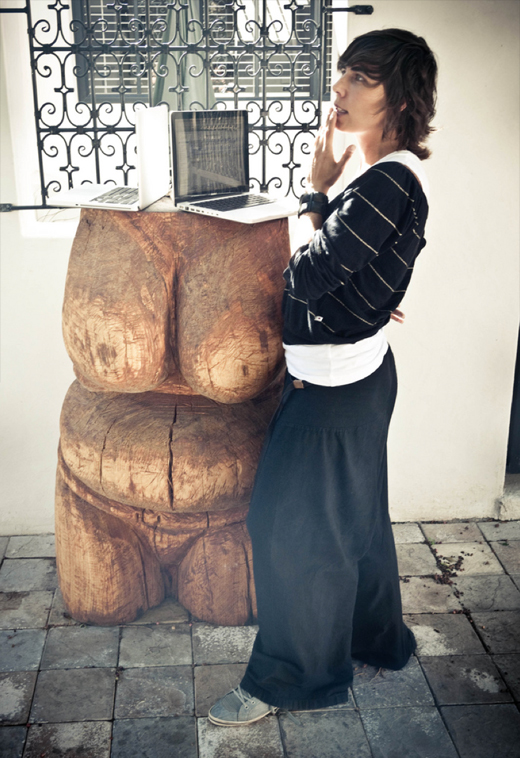 What did you find to be your most essential tool?
Our Macbook with wifi/internet. Without this, the trip would have been impossible. When leaving for Thailand, there was the ash cloud in Europe, and in Bangkok there was unrest and political clashes. Our embassy advised us not to go to Bangkok or the north of Thailand. Our flights couldn’t be changed. So we left to Copenhagen, a bit afraid that we’d be stuck there. We were lucky.
Then we arrived in Bangkok. We planned to go to Chiang Mai, but the news hadn’t changed, so we had to go to the South instead. We booked our flight straight away on the computer in the airport. And our hotels through our own website. Two hours later we were sitting on an island. I can’t imagine this without the internet.
Although, I can’t imagine this without a credit card either. So maybe the credit card. 😉
What is your goal for the presentation/slideshow? Do you want to become advocates for this lifestyle?
Traveling with your job is one way of lifestyledesign. In face, Catherine made a presentation on how you can implement lifestyledesign in your daily life. We want to be advocates for lifestyledesign itself, instead of this one tiny part that Tim Ferriss sold — traveling and passive income.
What we’re saying is, instead of just doing what your parents believed in, do what you believe in. And that’s not necessarily a nine-to-five job until you retire. This old ‘template’ is just not working anymore. We all know that the capitalist view on life is over.   Many people are asking themselves ‘is this it?’ They have the house, the TV, every possible luxury, but one desires the passion.
In the past, creativity was mostly linked to art or culture. But today, why not be creative in real life, in the kind of life you design for yourself? And even beyond, in the kind of society we want to build for ourselves.
For us, we figured out that we wanted to go and travel the world slowly for one year. And we found a hack that allowed it.
Will we do it again? Yep, sure, for several months, because we love traveling.
But I know friends that design their lives themselves too. At home. Just by deciding they wanted to work part-time and spend time with their kids. Or to quit that office job to become independent and pursue their passion.
For us, lifestyledesign is about finding your passion and finding a way to make your life about that instead of earning money for your retirement to pursue that passion then. Live now, not then.
Thanks guys for sharing not only your journey, but also a mode and method for our own! We’re looking forward to seeing the next adventure. 🙂 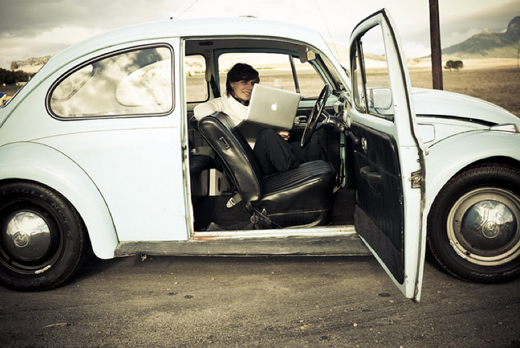