Every 60 seconds, there are over 13,000 iPhone applications downloaded, around 600 new videos added to YouTube, over 70 domains registered, more than 60 new blogs launched, almost 700,000 searches on Google, and 168 million emails sent.

Seem overwhelming? Not when presented as an infographic by the Shanghai-based designers at GO-Globe.com. (Click here for a link to a full-size version.) 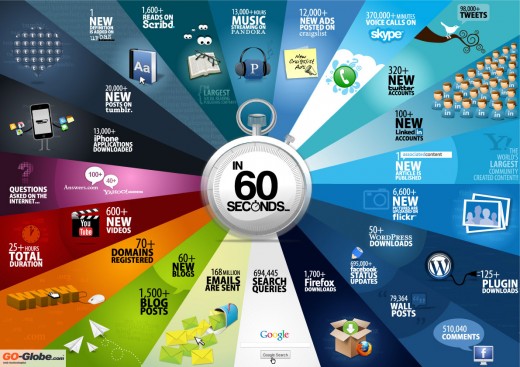 Detailing the number of tweets, calls on Skype, music-streamers on Pandora, and other activities on the web, the folks at GO-Globe.com packaged a mountain of information in digestible rainbow-colored spokes extending from a classic stop-watch image, underscoring that all of this happens in just 60 seconds. It’s a sleek, static presentation, using data reminiscent of JESS3’s own State of the Internet video, released last year.

The visual is an admirable distillation of a minute on the internet — so much activity that it’s hard to even imagine how much has happened just since you began reading this blog post.

Tags: infographic, state of the internet