Late this spring, the Nobel Prize-winning organization Amnesty International celebrated its 50th anniversary. Here at JESS3, we were honored with the opportunity to distill 50 magnificent years of accomplishments into one infographic, outlining Amnesty’s storied history. 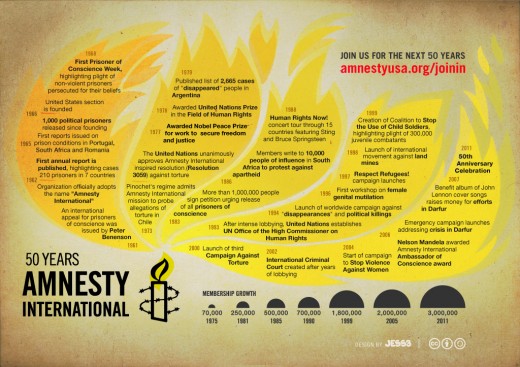 Additionally, we produced four more infographics dedicated to Amnesty’s work. One detailed the U.S. maternal health care crisis, including sharp disparities for maternal health between non-Hispanic black women and women of other races. Another graphic detailed the extraordinary rendition of Canadian citizen Maher Arar, who was abducted by U.S. authorities in New York and sent to a prison in Syria where he was tortured and spent a year without ever being charged of a crime. The third infographic shone a light on how different countries apply capital punishment and the international trend towards abolition. Finally, we produced imagery celebrating Amnesty’s “Write for Rights” campaign, and the broad international involvement that they have cultivated.

Before distributing these five infographics — on Amnesty’s history, maternal health, extraordinary rendition, capital punishment, and “Write for Rights” — JESS3’s strategy team assembled an extensive universe of journalists, bloggers and influential Twitter-users who either demonstrated a long-standing commitment to distributing information on these topics or had recently written or tweeted about them. This micro-targeting approach is central to our PR strategy, permitting JESS3 to break through the cacophony of noise that opinion-shapers are subjected to daily in the social media age. Instead of a one-size-fits-all press release certain to see more spam folders than eyeballs, JESS3’s PR team delivers personalized, valuable information tailored to each opinion-shaper’s demonstrated interests. We take this approach in publicizing all of JESS3’s work, including The Geosocial Universe 2.0, which went viral when we strategically cast it into targeted information streams. And the approach worked again in our efforts to celebrate Amnesty’s 50th birthday.

For the Amnesty graphics, our micro-targeting resulted in a list of almost 200 journalists, bloggers and influencers on social media channels. We pitched the Amnesty history and “Write for Rights” graphics to folks who recently wrote about or engaged with specific Amnesty International content, including a recent human rights ad that the organization posted in classified sections of newspapers, Amnesty’s denunciation of Egyptian military courts, the organization’s 2011 Annual Report, and a fantastic video produced by Carlos Lascano celebrating Amnesty’s anniversary. We expanded our list for each infographic by examining who recently wrote about maternal health and class (i.e. abortion rising among poor women, but falling among others,) U.S. treatment of detainees in the “War on Terror” (i.e. Wikileaks and Guantanamo detainee Omar Khadr,) and the death penalty (i.e. the New Yorker‘s article “The Mitigator.”) As a result, our list of 200 or so influencers was not merely a group of people determined by some overly general public relations software to occasionally cover the topics of our infographics; they were individuals specifically identified to have recently covered the issues on which we sought further coverage by sharing Amnesty’s graphics. And our micro-targeted approach bore fruit.

The maternal health graphic popped up at ColorLines, an influential outlet reporting on news of interest to communities of color. Not only did ColorLines share the graphic, but it was embedded within a full post educating readers on U.S. maternal health care, sharing important information about one of Amnesty’s key issues with an extensive audience. Readers tweeted the piece over 100 times and shared it on Facebook 324 times.

The Maher Arar infographic found a home at the American Civil Liberties Union’s blog, one of the top outlets for news on torture and extraordinary rendition. The ACLU was kind enough to share Amnesty’s birthday with readers, though not without wryly noting that the ACLU celebrated its 90th anniversary last year. In just a couple of days, that post was liked and shared on Facebook a couple of dozen times each, and tweeted by 85 people, not least of which was @ACLU itself.

The graphic on capital punishment wound up at The Root, a respected black news and opinion source which had recently published a piece on developments within the death penalty activist community. Scores of folks shared, liked and tweeted the piece, including @TheRoot247, and many of its 13,365 followers.

JESS3’s Jesse Thomas also shared each of the infographics on his regular column at Forbes, we posted them here on the JESS3 blog, and they made the rounds on any number of design-related outlets where JESS3’s work regularly pops up. In the wake of the buzz over Amnesty’s 50th anniversary, countless readers enjoyed the five infographics that we produced, and Amnesty boasted a 3,570-follower increase in its Twitter audience. 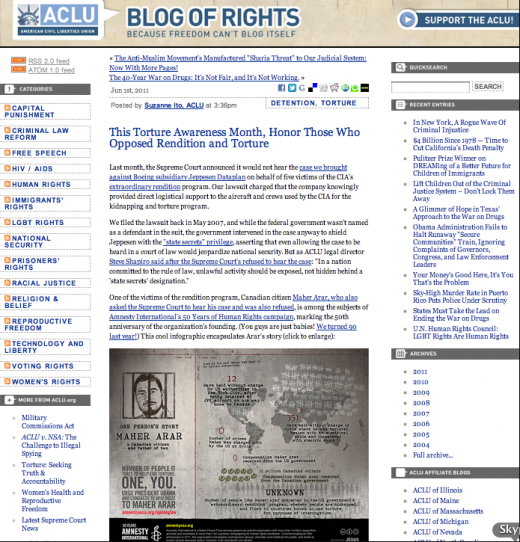 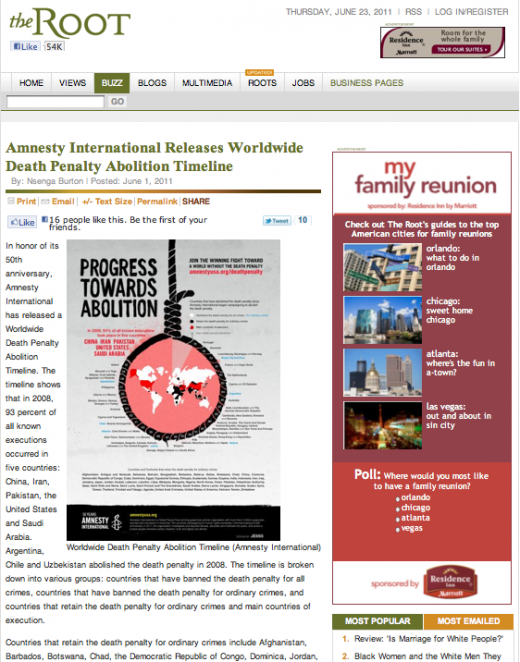