A recent survey which received nearly 1.7 million responses found that 51% support the extension of Bush’s tax cuts only for the middle class, while the remaining 49% felt the tax cuts should remain in place for all income brackets. This is just one of dozens of questions asked in Yahoo’s Ask America, a unique elections hub that gives a voice to the American voting public through non-traditional polling on a large scale. Ask America is collecting data on topics such as the economy, healthcare, immigration and more – below is a graphic that visualizes that data and brings the numbers to life (infographic is created by JESS3’s Data Visualization team) 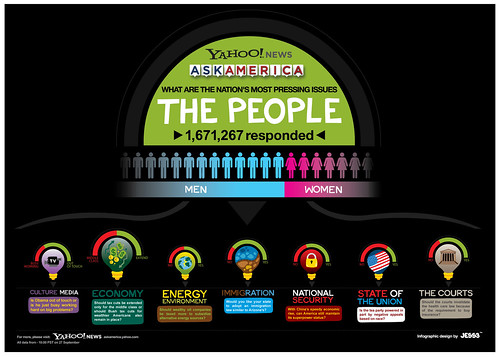 This graphic answers the question “What are the nation’s most pressing issues?” and simply breaks down the responses by 1,671,267 citizens by gender, answer, and issue at hand. The issue’s importance to the people is then represented by the size of the light bulb it lives in. With this illustration, it’s simple to see, for example, that almost two thirds of people polled believe that America can still maintain its superpower status despite China’s speedy economic rise.

Other survey results include:
* 65% believe Obama is “out of touch” while 35% maintain he is “busy working on hard problems.”
* 53% feel that wealthy oil companies should be taxed more to subsidize alternate energy sources.
* 75% would like to see their state adopt an immigration law similar to Arizona’s.
* 56% think that the US can maintain its superpower size despite China’s speedy economic rise.
* 65% of respondents believe that the Tea Part is not powered by negative appeals based on race.
* 65% want the courts to invalidate the health care law because of its universal mandate.

The infographic is published under a Creative Commons license, so feel free to share it with your own readers.