The company is known as the most secretive in Silicon Valley, and leaks are rare. But after the phone prototype was left in a bar in the Silicon Valley town of Redwood City, photos of the device began appearing over the weekend in technology blogs, sparking a frenzy of hype among the Apple-obsessed.

Before long, pictures of the product appeared on Gizmodo, a technology news site, whose editors ripped it apart — as if it were an alien from another planet — to dissect its features. The Web site said late Monday that the phone belonged to an Apple engineer.

What’s new
• Front-facing video chat camera
• Improved regular back-camera (the lens is quite noticeably larger than the iPhone 3GS)
• Camera flash
• Micro-SIM instead of standard SIM (like the iPad)
• Improved display. It’s unclear if it’s the 960×640 display thrown around before—it certainly looks like it, with the “Connect to iTunes” screen displaying much higher resolution than on a 3GS.
• What looks to be a secondary mic for noise cancellation, at the top, next to the headphone jack
• Split buttons for volume
• Power, mute, and volume buttons are all metallic

What’s changed
• The back is entirely flat, made of either glass (more likely) or ceramic or shiny plastic in order for the cell signal to poke through. Tapping on the back makes a more hollow and higher pitched sound compared to tapping on the glass on the front/screen, but that could just be the orientation of components inside making for a different sound
• An aluminum border going completely around the outside
• Slightly smaller screen than the 3GS (but seemingly higher resolution)
• Everything is more squared off
• 3 grams heavier
• 16% Larger battery
• Internals components are shrunken, miniaturized and reduced to make room for the larger battery

How Apple lost the next iPhone
All the details about the device
And finally, how Apple asked for their phone back 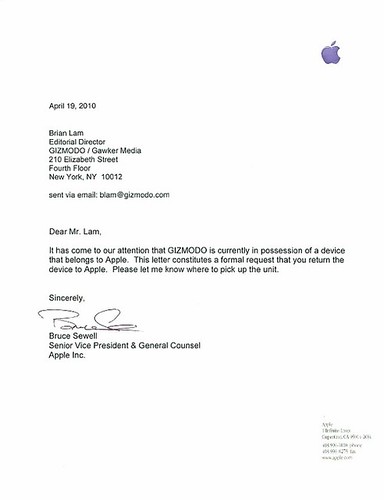