My name’s Takeshi Murata. I live Los Angeles with my girlfriend Francine Spiegel and a terrier. I’ve been here for about a year making experimental and psychedelic animations. Before moving to LA, I lived in Brooklyn for 5 years, and graduated from art school in Providence in 1997.

What do you do as a freelance designer?

Most of my freelance work is animation, illustration, or character design, and I often collaborate with other artists. I’ve had a bunch of different kinds of work with a really wide array of clients. For the last couple years I’ve been fortunate to work with Karl Ackermann. He’s one of the three awesome artists that make Milky Elephant. He’s included me in some great jobs, and has thereby saved me from eviction more then once. Super-Jam with Karl and Human Face was one of my favorites. 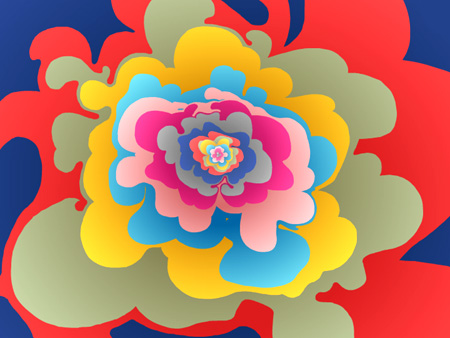 Human Face was a site I started with two other friends Jon Brzyski and Paul Kim in 1998. We used it as place to experiment with art and animation. As we started to get more freelance work together, we also used Human Face as a business name. This made things pretty confusing. Clients would go to our site looking for a resume or something, and would instead find a drawing of a werewolf or a 3D modeled man watching TV in his underwear. Since then our personal work has gone in different directions, and we’ve stopped updating the site. We still work together and use the Human Face as our collaborative business name.

Your work “Melter 2” was selected by The Designers Republic at DOTMOV festival held by Shift in November. What’s your impression for that?

It’s a great honor. I entered the festival because I like a lot of the artists that SHIFT shows, and to be selected by one is the best. I think Ian Anderson’s short description of my animation is better than what I can do.

Also, what was the concept for the work and what did you try to express in it?

I want to create new kinds space with my animation. I want to be able to transport the viewer is some way. I like to start with forms that are vaguely recognizable so there’s an initial point of reference. Then through the animation, I can shift the emphasis from form to movement. It’s at this point that I feel most expressive. I’m also inspired by psychedelic art and music because it reaches for something transcendental, but it’s also absurd and playful at the same time. I hope my animation is this way.

Where do you get ideas and inspirations for your work?

I get most of my ideas when I’m sketching or producing artwork. I’m not the kind of person that gets their ideas from walking around or driving or something. My inspiration comes from listening to music and seeing other artists work. I love the work of Yoshi Sodeoka from c404, who was a regular contirubutor for Shift. It is my favorite art on the internet since a friend showed me word.com in 1997. Dearraindrop, whose paintings and videos often look like they’re coming straight from thought in real time. And Ara Peterson, Jim Drain, and Eamon Brown.
They’re in Providence making insane experimental animation installations. One final artist whose work has continued to inspire me for years is Gary Panter. His work and process has really inspired me and a huge number of people I know.

Could you tell me the concept of the cover design for this issue?

This is a new experiment from my Melter series. It’s a single flat animation that I hand drew into Flash, then manipulated and multiplied. I wanted the animation to float on the cover without a set vertical framing, and to be scalable depending on the shape of your browser window.

Is there currently an interesting trend in Los Angels?

I’m still pretty new to LA, and a lot of the time that I’ve lived here has been spent inside working on animation. One cool show that I’m excited to be a part of is called “Tedious Limbs” and it’s going to open on January 3, 2004 at the Flynn Farm – 3765 Legion Lane in Los Angeles. Otherwise there’s always the La Brea tar pits.

Could you tell me your vision for the future?

I want to continue freelancing to support my psychedelic animation habit, and hopefully meet a lot more likeminded artists in the process.

Please leave a message for our readers.