When I was in Seattle I bought a possum by Jimenez, and it was love at first sight. I am now planning a trip to Oaxaca, Mexico to meet him and see the workshop etc. More on that later. 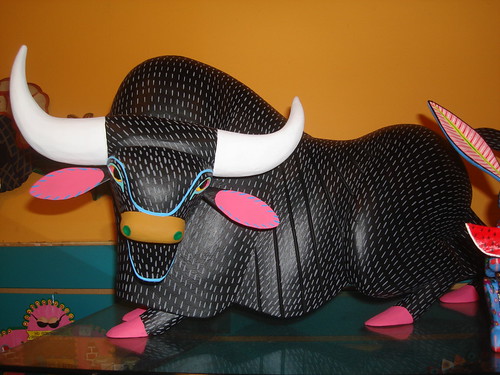 Manuel Jimenéz is usually credited as being the father of the popular carved animals, often referred to as alebrijes because of their similarity with the fanciful papier mache sculptures popular in Mexico since the 1930s.

Jimenéz grew up in Arrazola, Oaxaca in Mexico and worked as a shepherd for many years. Alone in the wilderness tending his sheep, he began to carve animal figures from copal wood. According to ABeCedarios author K.B. Basseches, Jimenéz did what is natural for artists—he captured the spirit of what was around him. As a shepherd, that happened to be animals.

Jimenéz started to sell his wood carvings in the late 50s and by the late 60s was exhibiting in museums in Mexico and the U.S. However, the figures did not truly take off until the 80s, when Santa Fe décor and style became popular in the United States. The small, brightly colored figures complement the adobe and bright Mexican or Indian colors and patterns.

As people in Arrazola and surrounding regions saw the Jimenéz family’s success, they took up the art form too and the region became known for its wood carvings. Since the 1990s, this popularity has been the catalyst for an economic boom that has allowed Arrazola to develop health clinics, pave roads, build a church and plaza, construct sewers, and facilitate education for children.

The technique used to create alebrijes appears simple on the surface but requires an eye for form. The artisans will work with the natural form of copal wood pieces to shape particular figures. Using a machete, they cut off all the bark and trace out the figure. Then, using a smaller knife, they cut out all the body parts. The sculpture is left to dry in the sun for a week. As the wood dries in the sun, cracks are sanded and sealed. Finally, it is painted with acrylic paints. It takes approximately one week to create a single sculpture.

Although many families in Arrazola are now making their living or supplementing their income through woodcarving, author Cynthia Weill says that the animals created by the Jimenéz family are distinct: simple, clean, and sleek.

this one is by Luis Pablo

He is known for his realistic carvings contemporary use of color and painting techniques as well as his superb workmanship.

This talented couple of artists produce a wide variety of finely carved and painted figures. Damian carves them and Betty masterfully paints them.

(photos by the awesome www.oaxacafinecarvings.com)