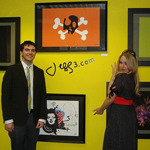 Leslie and I went to this pretty sweet brunch at the Hay Adams hotel near the whitehouse. It was hosted by the Mclaughlin group, and there were a-list people there, senators, reporters… washington life took leslie’s picture and dude told her she was beautiful and took her name down and said she was going to be in next month’s issue!.. Frank Luntz is someone I always wanted to meet and he was there..

then we went across the st and there was this immigration rally .. and it was kind of hectic.. people yelling.. using noise makers, whistles.. shouting matches.. etc

because im dressed in a shirt and tie the conservatives kept looking to me for support.. and im like dude dont look over here.. these ppl were really kind of tripping… I think we need to be much more compassionate for immigrants.. and the crazy thing was how the cops were acting like their personal security force.. kinda crazy when both sides are acting like kids.. but at one point this lone black dude protester was being put behind the police line.. and this anti immigration dude was making homophobic refrences which was really not cool.. and it was just really weird being there.

then i went by my parents place and said hi to my cat benson.. I <3