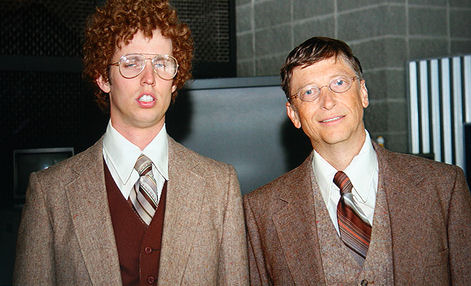 At the Microsoft’s Professional Developers Conference, Microsoft screened a video of Gates playing the role of a programmer in a spoof based on the 2004 cult movie “Napoleon Dynamite.”

The video showed the film’s celebrated anti-hero reporting to work as a programmer for the world’s largest software maker.

In a face-off between the two nerd icons, Jon Heder, the actor who plays Napoleon Dynamite, beats Gates in a slapping match to become the head of the software giant.

Gates is shown recruiting Heder’s fictional character, after which they are seen together in ill-fitting brown suits on Microsoft’s campus in Redmond, Wash., Reuters said.

In the last scene of the video spoof, Gates is seen scurrying into the office of his boss, Napoleon Dynamite. and yes there is a dance scene!